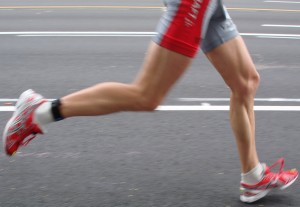 Since a thick heeled running shoe facilitates heel striking, to propel the body forward, the body must roll over the heel and on to the toes, which causes abnormal plantar distribution and fatigue fractures in the forefoot.

Below, shows how cushioned, raised heel footwear facilitates a heel strike where the foot is held on an angle thereby shifting the center of mass back during running and causes a runner to over-stride.

Why is heel striking bad?

Heel striking is a forceful style of running that produces braking, impact, and compressive forces that cause runners knee.

To avoid heel striking, wear a minimalist shoe that is flat, without the cushioned heel.

A heelless minimalist shoe is imperative for forefoot strike optimization. Runners who wear minimalist running shoes or run barefoot, strike the ground on the forefoot thereby reducing the heel strike transient because the heel is the last part of the foot to touch to the ground.

Runners must be aware that the magnitude of the ground reaction force in heel striking leads to a multitude of lower leg injuries such as runners knee, Achilles tendinopathy, and shin splints.

Most elite distance runners, especially Ethiopian distance runners who hold numerous world records do not run on their heels, but rather the natural way, on the balls of the foot. There’s a reason why these runners aren’t heel strikers!

Bad running shoes are unfortunately considered good running shoes because of the added protection, particularly under the heel. However, the heel cushioning has no clinical relevance in the realm of injury prevention, producing high impact peaks and instantaneous vertical loading rates.

Heel cushioning is virtually a defective component of modern shoe technology that has profound implications for influencing injury.

What’s the purpose of heel cushioning if it does nothing to reduce the impact variables that cause chronic running injuries such as stress fractures, plantar fasciitis, patellofemoral pain syndrome, and even osteoarthritis. In the words of Christopher McDougall: the only thing running shoes do is make money.

More on Why You Should Avoid Heel Striking:

Sinclair et al. Investigation into the kinetics and kinematics during running in the heelless shoe. Footwear Sci, 2014; 6(3): 139-45.