The thing that sold me on forefoot running in minimalist shoes was reading Born to Run by Christopher McDougall. He discussed in detail the running style and footwear worn by the Tarahumara Indians, a tribe of endurance runners in Mexico.

Running in sandals is nothing new to human evolution and I wanted to try it.

Why the Circadian X by Earth Runners? 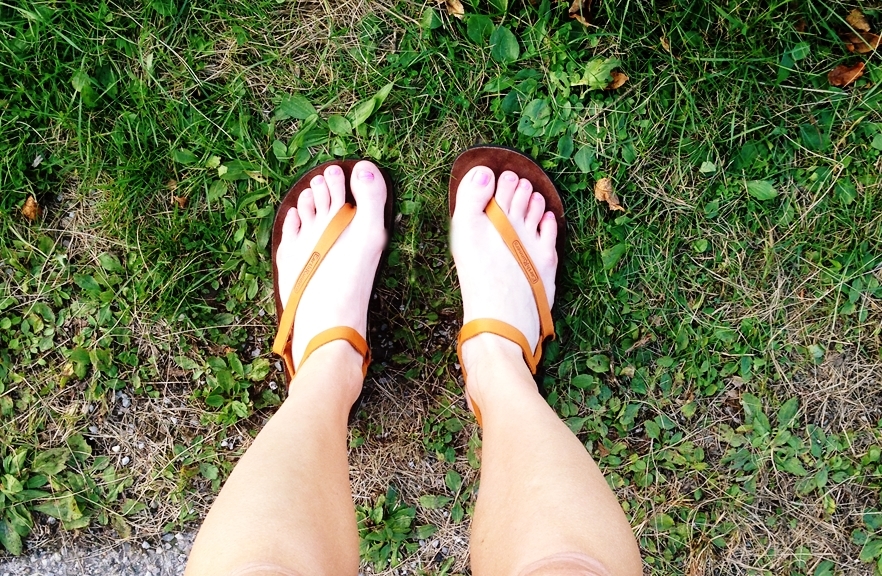 The running sandals I chose was the Circadian X  by Earth Runners because of the 6mm high performance Vibram tread and the durable yet soft lacing system which has an adjustable locking buckle to secure your foot in place.

Another intriguing element of the Earth Runner sandals was the copper inserts integrated in the sole. The copper inserts cannot be felt during walking or running, but the purpose of the inserts is to promote the flow of energy between the body and the earth, a process called grounding.

I have actually read reports by naturopaths and energy teachers suggesting that the earth provides a sea of antioxidants where grounding the human body into the earth supplies these antioxidants to restore balance. I thought this rationale was interesting and decided to strap on the Circadian X’s and hit the roads!

First off, when it comes to footwear, I prefer function over fashion. I dont care what the shoe looks like, as long as the shoe enables me to maintain good forefoot running mechanics. But, I did receive a lot of compliments on the sandals as they are aesthetically pleasing.

I also noticed that my toes were more relaxed in the Circadians X sandals compared with the VFFs where each of my toes are isolated.

I ran 13 km very comfortably and smoothly in the Earth Runners sandals. I had no problems with pebbles becoming trapped between my foot and the sandal. I really liked having my feet exposed to the air instead of in a closed environment during running.

I look forward to running in the Earth Runners Sandals during the spring and summer. However, I will probably wear them during the cooler months, but with thermal toe socks.

Who Should Wear The Circadian X

The Circadian X by Earth Runners would be great for newbie forefoot runners because the toes are not confined to the walls of a shoe thereby allowing the toes to spread out naturally during ground contact.

At the same time, the sole thickness and high level of durability provides a nice protective barrier for your feet. You can still feel smaller stones, but you don’t experience that ‘piercing’ sensation as you would in the VFFs.

I think any runner who is refining their forefoot strike should consider the Earth Runner sandals because the flatten, flexible sole allows for a more direct interaction with the surface which can dramatically improve your technique.

I would also recommend minimalist runners to test drive the Circadian Xs, especially those who are shifting away from the VFFs.