Are you experiencing stumbling blocks leading up to your first 5km run race? Jaylon Carter does a great job at providing an excellent, motivational support base for anyone looking to tackle their very first 5k, helping to make your first 5km race a great success!

I’m not a runner. As a matter of fact, I don’t really like running. However, in one week I’m taking part in my first 5k “marathon” in Japan; everything in Japan is called a marathon. I’m doing it because I’ve never done it before and so can add it to the list of things I have challenged myself to do.

I thought about doing a run like this about a year ago after a series of challenges. About a year before that I decided to give myself small fitness goals to concentrate on. I’m quite slim naturally at 5’9” and around 130-135 pounds depending on what I ate that day. I don’t quite remember why but I decided to start doing 30-day challenges to add some exercise into my daily routine. Every month I followed a different challenge that I found on the Internet. First was a push-up challenge, than 30-days to a five-minute plank challenge, then a side plank challenge, and then a squat challenge. I started swimming a kilometer in the morning several times a week. I worked up from watching sexagenarians and above continuously swim laps while I had to take minute breaks every 25 meters to taking breaks every 100-200 meters. I didn’t necessarily enjoy the exercises themselves but I reveled in accomplishing these goals.

Now my sister on the other hand is an exercise junkie who has trained several people to successful fitness goals. At the mention of the app C25K that she had suggested to someone I checked it out myself. Before started the app, a minute of running had me gasping for air like a gassed boxer in the twelfth round. Nine weeks later I had completed the program and 5k with a running time of 32:08 at an average pace of 6:29 per kilometer.
Done. Goal accomplished. I wasn’t planning on doing it again. I had hung up my running flip-flops.

Yes, flip-flops. Again, I’m not runner but I had read Born to Run by Christopher McDougall years earlier – not for the running but for the information about the chia seeds. Having read the book, I knew about the very high chances of runners getting injuries and I wanted no part of that. 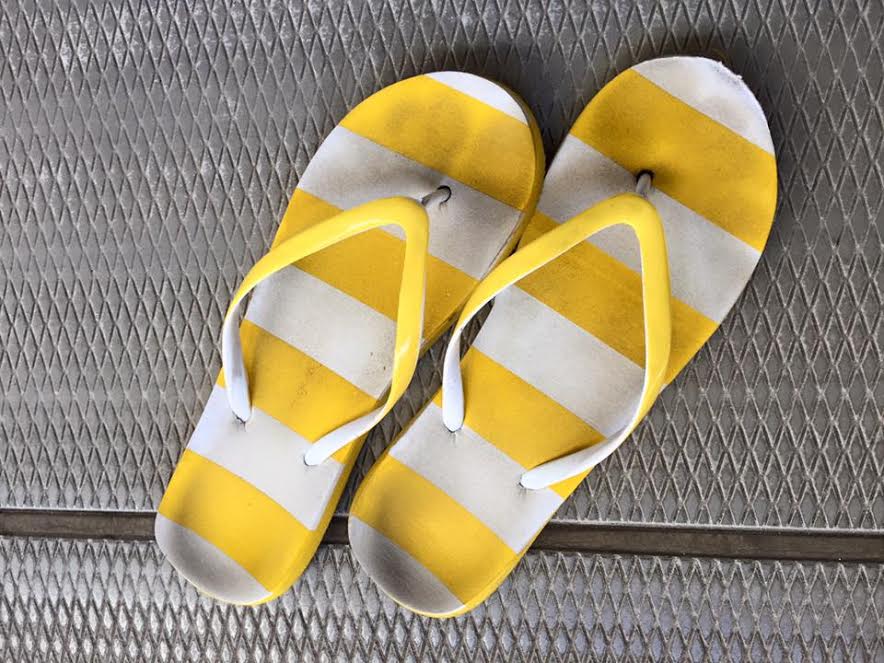 I couldn’t find any minimalist running shoes without arches in any local stores, so I put on my flip-flops and gave it a go. If the Tarahumara could do it, so could I. I grew up in Hawaii so I’m no stranger to slippahs. I had no foot pain or calluses from the beach sandals so I kept at it and completed the program. I did miss it though. Not the running but the goal, the progress, and the schedule. Incidentally, a friend of mine that did the app with me has kept up the running three times a week for a year and a half since then and has the flat stomach that I was hoping for after nine weeks.

So now after not running at all I’m about to run a 5k next week. For the past two months I’ve been half-heartedly training by running about once or twice a week. My first run ended up being 2.73 kilometers in 16:55 minutes at an average pace of 6:11 per kilometer before my breathing was too labored to comfortably continue and my will succumbed to the complaints of my inner voice urging me to “stop this nonsense.” I was pleased though and encouraged that I had enough time to complete the 5k. I’ve since run 5k twice in the past two weeks; once was 5.01km in 34:18 at 6:50/km and 5.26km in 36:27 at 6:55/km. I can do this. 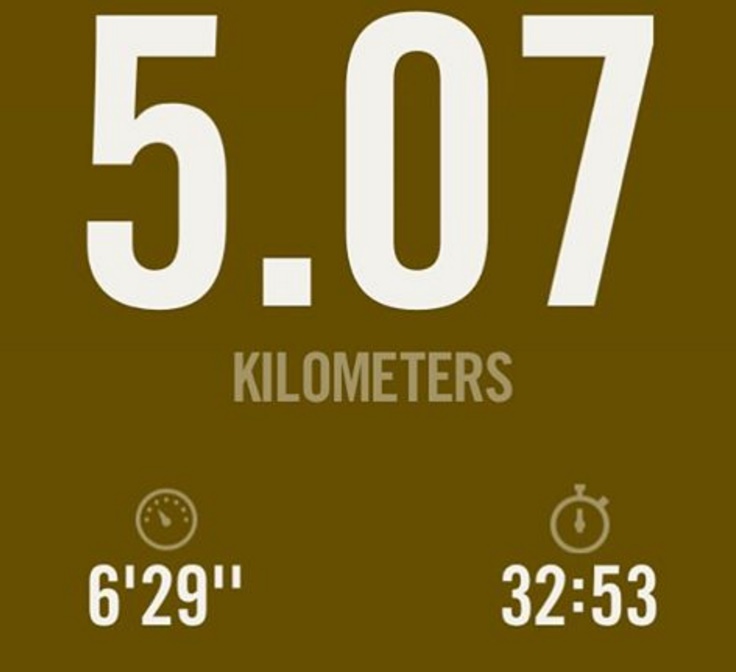 I’ve learned a few things about being able to do this. 5k is a warm up for avid runners I’m sure but for non-runners, the idea of running for the full length of a sitcom and then some is insanity. I make my way through by doing a few things that help.

Music helps me focus on something other than the fact that I’m still running. I use music to gauge distances even when driving long road trips. An eight-hour drive isn’t eight hours; it is eight CDs. It’s easier to break up the time that way and feels more manageable.

Mr. Miyagi wasn’t kidding. The first thing that will stop you in your tracks is not having control over your breathing. You can’t huff and puff your way through. Breathing deeply in and out at a measured pace will let you go longer.

I don’t start out thinking I have 5 kilometers to go. I look ahead and think, “I have to get to that tree.” I focus on that tree giving myself a tangible goal. 5 kilometers or 30 minutes is kind of abstract and will make things seem more difficult but I can see that tree. I can see myself getting closer. I can pass it and instantly acknowledge my accomplishment. Then I look to the next point. It’s constant motivation.

Go at Your Own Pace

I don’t run for speed. Although I’ve posted the times here, I don’t care about them when running. If today is a 7:00/km day then so be it. My end goal is to finish not burn myself out. I’ll slow down a bit to get myself together if necessary. I just try to keep moving.

Go slow. Let your body get acclimated to the effort. If your running friend is doing 10k every day you don’t have to keep up. Don’t go from no running one day to trying to match them on that level. Do 1k of running and walking for a week and then maybe one and a half or two the next. I had no pain doing the C25K app but since I tried to jump back in and go back to where I left off without building back up to it, four plus kilometer runs have my knees sore for several days. My will kept me going but my body wasn’t ready.

I’m not talking about a Joker smile that will make people think you are mad. Just give yourself a slight relaxing smile to combat the scowl that you usually see when people are doing rigorous exercise. It makes a difference in your whole system. A smile calms the body a bit and gives psychological and physical benefits. Try it the next time you are running and find yourself screwing your face up. Find out more here about how smiling affects your brain, and performance.

In any activity, even sitting, we tend to tense up and hold tension unnecessarily. I periodically make a conscious effort to relax and release tension throughout my body when running. I relax every muscle I can that I don’t need tensed while running. I learned this through Tai Chi and Qigong instructing and practice. Even right now, while reading this, you are most likely holding your shoulders and tensing your stomach. Stop that. 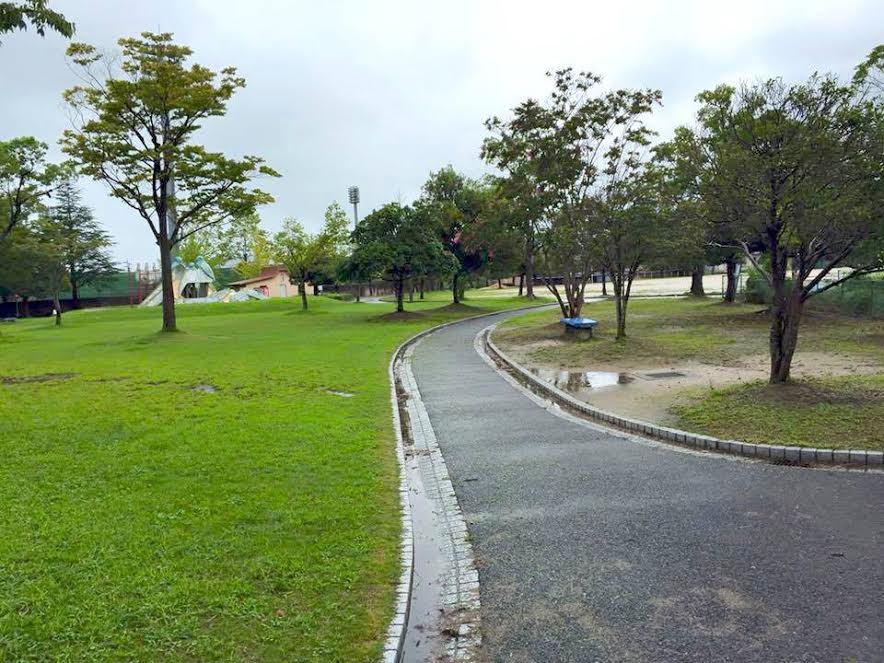 These are the things that help me get through something that I really can’t believe I’m doing. Along with my chia seeds they are what I will employ next week when the organizer waves the flag or cuts the ribbon or says “Ready, set, go”. I don’t know what they do. It will be my first time.