Runners are often told to run on grass rather than pavement for obvious reasons. Humans also evolved to run on increasingly dry and open grasslands, not on pavement. 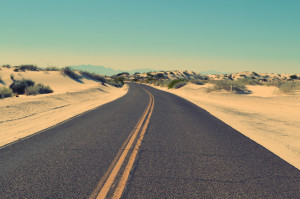 However, the research behind Lieberman’s work tells us how and why forefoot runners are able to run on pavement, barefoot or shod, without getting injured and heel strikers are not so fortunate.

The evidence comes from an array of data that shows that heel striking leads to injury regardless of surface hardness, or softness. How so? The heel strike-transient.

Another downfall of the ground reaction force at heel strike is that it occurs at a magnitude between 1.5 and 2.5 body weights.

Unfortunately, heel strikers generally don’t feel the ground reaction force due to the thick-cushioned heeled shoe which only dampens impact by 10%.

The Problem is Heel Striking, Not Surface

Researchers believe that since forefoot running reduces over-striding by keeping foot strike position closer to the body via knee flexion, ankle plantarflexion, and forward leaning, the ground reaction force is lowered, the heel strike-transient is eliminated and therefore, a forefoot runner can run on hard surfaces without injury.

Remember, it’s not the surface that causes injury, it’s the foot strike technique in the form of a heel strike.