This is why many recreational runners avoid blaming the padded heel of a shoe for causing heel strike. However, Kenyans run in heeled running shoes and do not heel strike due to earlier adaptations of a non-heel strike running style determined by running barefoot.

Additionally, past reports have demonstrated that the positioning of the foot in a heeled running shoe encourages a heel strike landing over a forefoot strike landing during running.

For example, Pearl et al., reported that heeled running shoes encourages a heel strike landing when running on account of increasing stride-length and eliminating controlled dorsiflexion by the plantar flexors during landing. 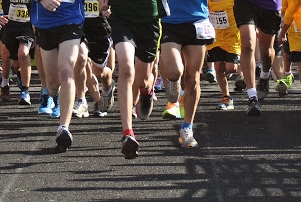 So, despite wearing heeled running shoes, how come Kenyan runners are not heel striking like recreational runners?

Most Kenyan elite distance runners adopt a forefoot strike landing on account of running barefoot during their earlier years. Therefore, foot strike is well determined before they become shod runners.

Essentially, Kenyan elite distance runners go from being habitual barefoot runners to habitual shod runners and the heel elevation of their selected footwear is not as high as the heels of the shoes many recreational runners wear.

Running barefoot during childhood development allows plenty of time for the forefoot strike technique to become learned or hardwired in the neuromotor units of the body.

And, Pearl at el., also hypothesized that if humans evolved to run barefoot with a forefoot strike, natural selection did not adopt us to run with a heel strike in shoes. This may suggest why the forefoot strike pattern of most Kenyan distance runners wearing heeled running shoes is not disturbed.

Kenyan distance runners learned how to run correctly before running in a shoe and many of us heel strike because we are not raised to run barefoot whereby earlier years of development is a critical time to learn key motor strategies, especially motor strategies that reduce impact when running barefoot.

And finally, because our foot strike is often undetermined when we begin running later in life coupled with the data showing that the foot configuration in a heeled running shoe inadvertently causes heel strike, the fate of our foot strike is in the shoe.