I created Run Forefoot to educate why proper foot strike is important in running and to show that running is not injurious as commonly perceived, if you adopt a proper forefoot strike. Here’s why and here’s my story about how forefoot running was a game-changer for me and why it can be for you too!

When I started running, I knew little about running biomechanics, or proper footwear. I wore high-heeled, heavily cushioned running shoes and was a heel striker.

I fell in love with running, but was injured frequently. I figured my body needed time to adjust being a ‘newbie’ runner.  However, as time went on, my injuries became chronic, even though I was getting stronger as a runner. I was sore and stiff too frequently, but giving up running was NOT an option. I knew there was more in it for me, so I did what I do best = research!

The study mentioned that before modern weapons, our ancestors most likely ran barefoot to hunt food, a hunting method coined as persistent hunting.

Earlier work suggested our ancestors were excellent endurance runners, running 10 km to 14 km per day. Essentially, to run meant to eat, and survive. Running was a way of life. But, things are different today as many strongly believe running is highly injurious. Why?

Running-related injuries are consistently high, even though athletic footwear is deemed as safe, helping us run better to protect us from injury. But, again, runners continue o injure.

So, these are the fundamental questions about running: if our ancestors relied on running to survive, they must have run in a way that would have been economical and more importantly safe, right? Remember, our ancestors ran barefoot, not only on grassy areas, but hard tundra.

Many experts believe that for our ancestors to run long distances injury-free, there’s a good chance they were forefoot strikers, not heel strikers. Why were they most likely forefoot strikers and not heel strikers? Aren’t most joggers heel strikers? It turns out that the structure (elevated cushioned heel) of most conventional running shoes positions the foot to easily encourage heel striking during running, whereas in barefoot running, the body tends to default to landing on the forefoot to effectively reduce jolting and impact on the body. It’s the less impact factor thanks to the forefoot strike that enables barefoot running to feel comfortable, on any surface!

It turns out that running forefoot while barefoot is less forceful and possibly less energy-taxing than heel striking. Why would running barefoot with a forefoot strike be less energetically taxing? The sensory energy that flows from the foot when you run barefoot prompts more widespread activation of withdrawal reflexes in the legs and feet, foot strike awareness gets enhanced and you have tighter controls on balance, all of which adds up to less reckless, less intensive, more controlled footfalls that project less impact on the body and therefore, the muscles invest less energy to absorb impact. That is just one of the MANY ways in which forefoot striking during running may be more economical than heel striking.

This is also why its so essential to recognize the important role barefoot running can play in accelerating progress in stride correction, reversing your heel strike to a forefoot strike and may make it easier for you to avoid overuse and impact-related injuries. 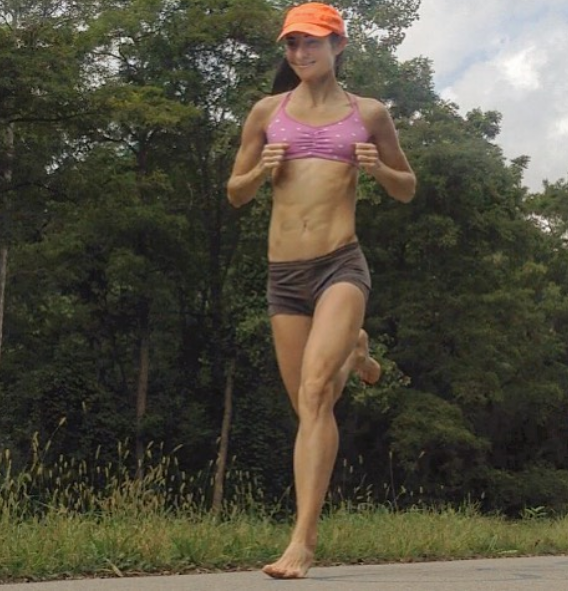 Barefoot running protects what makes the body’s reflexive and sensory system great, whereas ongoing use of conventional running shoes may diminish key reflexive motor outputs that goes into landing lightly. As a result, you may mistakenly land with greater downward forces in thick cushioned running shoes. Moreover, barefoot running and walking keeps the feet functionally strong by keeping them independently engaged in an ongoing capacity and in this way, the feet are more likely to be healthier for years to come!

So, does this mean humans are hardwired to run forefoot, not rearfoot? Maybe, especially since most elite distance runners from East Africa, who are currently the best in the world, ran barefoot

for many years and are also mostly forefoot strikers, not heel strikers, suggesting that natural selection may favor certain mechanical defenses against high impacts during barefoot running –the forefoot strike being one of them.

I analyzed the foot strikes of elite Ethiopian runners, namely because they look smoother and more efficient than many American and Canadian elite runners.  No offense.

My favorite runner is Tirunesh Dibaba from Ethiopia. I learned that she, like most Ethiopian runners, ran barefoot until adolescence and to me, she is the perfect example of a forefoot striker.

Landing on the heel while running barefoot is painful since the heel pad is of bone and minimal soft tissue.  Studies also show the heel pad is sufficient in absorbing impact from walking, but may lack the durability to absorb the collision forces generated in heel running.

Comparatively, East African runners may have better biomechanics having ran barefoot, allowing for earlier adaptations to a forefoot strike running style and may suffer less lower leg injuries than runners who habitually wear shoes. This may be a good reason that East African runners typically compete in more races, including marathons, per year than many elite American and Canadian runners.

However, that is not to say East African runners never get injured, they push beyond their limits too and may encounter over-use injuries; but the frequency, severity, and the nature of their injuries may be considerably LESS than the injuries of heel strikers.

The Harvard study along with fixated on Tirunesh Dibaba’s forefoot running style, changed my life as a runner and my running form! I switched to forefoot running, although, it took time to adjust, but in weeks, I was running pain and injury free.  My joints feel more relaxed and springy than when I was heel striking.  I now run longer and train harder without interruption from injuries.

Though I may not be an elite runner, or a coach,  I am a runner who learned to run with the same forefoot running style as the elite runners, and I feel that I am able to reap the full health benefits of running.

I hope you enjoy my blog and YouTube channel (here) and get inspired and motivated to learn forefoot running. Please contact me if you have any questions, if you’d like to share your input, business inquires, or to chat about running in general.

Runforefoot.com is fully owned and operated by Bretta Riches.