One of the reasons I admire Paula Radcliffe is for her forefoot strike running style which helped her smash so many world records, for example, her women’s marathon world record, 2hr:15min, is very impressive. But aside from her biomechanics, I noticed that she always wore nasal tape. I also noticed that very few of the other runners wore nasal tape. So, did nasal tape have a significant influence on Paula’s outstanding performance? And if so, how do nasal strips work. Here’s a little background on how nasal strips work and how they could help your running performance, too. 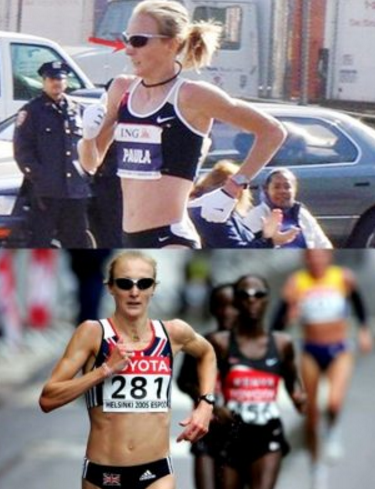 How Nasal Strips Work and Do They Work for Running

According to Murray Grossan, M.D, an otolaryngologist at Cedars-Sinai Medical Center in LA, the idea that nasal tape is effective at improving performance comes from the observation that nasal tape works by lifting up the top of the nose and opening up the nasal valve, making breathing less difficult during exercise, and even during sleep. By the logic of this approach, wearing nasal strips for running may be rewarding. In addition, Gosepath et al. 1997 found that the use of nasal strips increased transnasal flow by increasing the cross-sectional area of the nasal cavity, therefore improving nasal ventilation.

A related performance idea about nasal tape has also generated interest: they may be a safer alternative to commercial decongestants. A study by West (2000), investigated the effects of nasal breathing strips on pulmonary function and aerobic performance in well-trained male athletes. The data showed that nasal breathing strips mechanically expanded the walls of the nasal cavity, reduced airflow resistance which resulted in greater ventilation volumes at maximum exercise. In other words, the participants were better at sucking in more air when a breathing nasal strip was worn during exercise.

But of course, the most straightforward reason for Paula’s outstanding athletic resume is hard work, however since evidence consistently shows that nasal strips improves breathing, a 1/2-inch piece of medical grade adhesive tape on your nose certainly wont slow you down if you decide to give it a try.

How to Swing Your Legs When Forefoot Running

The Only Decent Minimalist Shoe from Mizuno