The Merrell Vapour Glove 2 Trail Running Shoe has definitely out-innovated and out-competed many of the running shoes on the market.

The Merrel Vapor Glove 2 minimalist trail running shoe is probably the most popular, most revered barefoot-inspired running shoe out there.

The power of the Merrell Vapor Glove 2 is its barefoot construction which is necessary for improving foot muscle tone and biomechanics for both running and walking, but even more important is the sensory input gains at the feet, which drives good, stable forefoot running mechanics. This is why the Merrell Vapor Glove 2 is better serving than most traditional trail running shoes mainly because the Vapor Glove 2 creates a transformative environment for the feet that ripples out to the entire body – when the foot/ankle complex is strong, your balance becomes stronger, your posture improves and it becomes very difficult to get injured. Not only that, there are constant evaluations going on in your mind about how you are stepping, making your forefoot running form more manageable.

I believe the Merrell Vapor Glove 2 shoes gives you an enormous advantage for avoiding running injury and performing well. Let’s be realistic that barefoot-like running shoes provides the greatest acceleration for growth and strength, not just at the physical level, but at the mechanical level, and I don’t think anyone can argue against this.

The mountains of wear-tester reviews on the Merrell Vapor Glove 2’s sends a strong message that these shoes are key to unlocking productive gains by enabling you to feel the ground and use this ground-feel to help fix your running form and equally so, strengthens the arches and the calves to a sizable mechanical advantage.

Specifications of the Merrell Vapor Glove 2

How They Compare to Other Minimalist Running Shoes

The outsole of the Merrell Vapor Glove 2 is 5.5-mm thin and is zero drop. I like that the rubber outsole is flexible and molds with the contours of your underfoot. This type of fitting is a productive part of the design because the shoe gives a glove-like fit which helps meet your foot’s functional and mechanical needs. 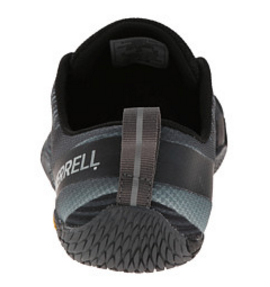 The outsole of the Merrell Vapor Glove 2 is so thin that you can distinctly feel gravel under your feet, so it’s up to you as to what running surface you want to wear these on. Bare in mind, that you wont get hurt if you can feel small pebbles and stones under your foot, rather this sensitive ground-feel effectively strengthens your leg swing retraction which leads to lighter landings. I do believe there needs to be some ground-feel sensitivity to help you learn to correct your running form.

The outsole of the Vapor Glove 2 is smooth and provides good clutch and grip on the trails. You have to remember that you don’t need protruding, overly aggressive tread to give the best traction. You can have a smooth-textured outsole and still acquire good traction on slippery surfaces. AND, a smoother outsole is more natural. I always say that if you want the barefoot experience, it starts with choosing a shoe that reflects the anatomy of the human foot. Our feet don’t have protruding tread, so this is why its uniquely important to choose a shoe with a smooth outsole.

The Vapor Glove 2 is categorized as a trail running shoe, and they are very well-reviewed among trail runners in that the shoe fully supports trail running in many respects mainly by providing good traction, robust durability, and comfort at the outsole.

The upper is stretchy and airy, you can feel the breeze through the shoe, so your foot doesn’t feel contained or crammed like it does in most traditional running shoes which typically has a very narrow toe-box.

The wide toe-box of the Vapor Glove 2 lets your toes spread out which improves balance control. The upper is light and breathable. The colors of the shoe are more bright and vibrant in person than in the photos.

You can wear them comfortably without sock without having any problems with irritable rubbing or blisters and of course, going sockless makes a huge difference with letting in more sensory feedback.

The upper of the Merrell Vapor Glove 2 appears more durable than many of the Vivoarefoot running shoes. The upper is also thick enough to give some protection when crossing streams and running through puddles. They are machine washable, too!

The Vapor Glove 2s are very versatile. They are good for weight-lifting because of the 0-drop construction, they have no arch support, and of course, they have no unsturdy compressible underfoot materials, therefore these shoes give absolutely no mechanical interference. This is how the Vapor Glove 2 gives you a more stable base for weight-lifting.

They’re flexible for cross-training and burpees. The rugged construction is a perfect match for hiking. The shoes perform well when running on grass, pavement and the treadmill. The durability of the Vapor Glove 2 holds great promise for running long distances and since they provide solid grip and traction for the trails and because of their durability, the Vapor Glove 2s are well-equipped for adventure or obstacle course races as compared to the traditional trail running shoe.

Im satifised with the Merrell Vapor Glove 2 and you must give Merrell credit for doing something that is truly hard to do which is constructing a shoe that feels paper-thin, that has enough structural fluidity and flexibility to move with your foot, which would require thinner materials, but at the same time, the shoe is incredibly durable and outlasts many other minimalist running shoes.

Also, the Vapor Glove 2 does a pretty good job at modelling the barefoot experience, and from that dimension, the overall result is positive regarding strengthening your lower legs and helping to normalize your running form via encouraging a less harmful landing pattern (a forefoot strike) which is first and foremost. I think it’s a major competitive advantage if you run with a forefoot strike. We’ve seen how the best runners in the world run, and it’s not with using a heel strike running style, it’s a forefoot running style.

It’s wonderful that a lot of runners are benefiting from the Merrell Vapor Glove 2 and Im hopeful you will too.

I also did a video review version of the Vapor Glove 2s: