Here’s how to maximize your speed training: take off your shoes! Yes, it is that simple folks. It turns out that running fast in running shoes doesn’t always encourage a forefoot strike (as once thought).

Many runners who wear cushioned heel running shoes have a hard time landing correctly on the front of their foot and in some cases, these runners heel strike without even knowing it. And remember, fast running with a heel strike landing increases the magnitude of the braking force. 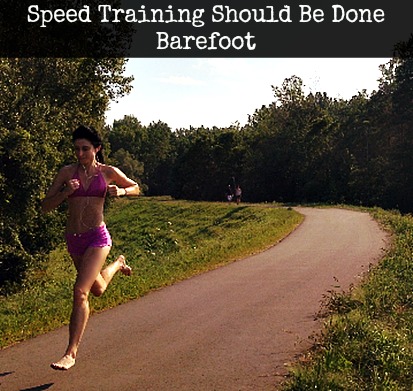 Speed Training Should Be Done Barefoot

Their data contrasts with other reports which have found that running speed has a great influence on foot strike. Nonetheless, the data from the present study is concerning because heel striking is associated with greater impact forces and loading rates than forefoot striking.

Always remember that proper motor coordination and skills during running relies on your feet’s ability to feel the ground, but in a running shoe, your feet are unresponsive and you end up having a hard time discriminating the feel of impact -this is why you are unable to recognize if you are heel striking or not.

Barefoot running is the best sensory integration therapy because you’ll feel the unpleasantness of landing on the heel, especially when you drop the pace.

Here’s some great tips on how to get started running barefoot.

How Runners Hurt Their Knees

Where to Get Barefoot Running Shoes

The Biggest Benefit of Running Faster with a Forefoot Strike