As compared with heel strike running, forefoot running makes running faster, longer miles easier on the body, especially in the absence of footwear. This is because forefoot running is on record for reducing overall musculoskeletal loading, namely reducing compressive loads on the shins, knees and hips and impact never rises beyond the maximum tolerable limit on the long bones (like the shin and femur) or the knee. This is why femur fractures as well as runners knee are significantly low in forefoot running.

The radical differences in impact between heel strike vs forefoot strike running comes from the absence of certain impact force variables in forefoot running (I did a YouTube video explaining more on these impact differences here!). Specifically, forefoot running doesn’t generate an impact variable called the “spontaneous impact transient peak”, which is produced in heel strike running and is implicated in most muscle and long bone injuries.

Also in forefoot running, the foot doesn’t collide with the ground in a highly force-intensive manner like it does in heel strike running. In fact, forefoot running softens the blow between the foot and the ground because in a proper forefoot strike landing (shown below), initial ground-contact is made on the lateral side of the forefoot (the outer side of the forefoot which is the widest part of the foot). This precise landing configuration allows the foot to slide down onto the ground more smoothly with minimal jarring and also increases surface area for better impact absorption (because of the larger foot contact area), thereby preventing a burst in pressure force localized to one small area on the foot which is so often the case in heel strike running. 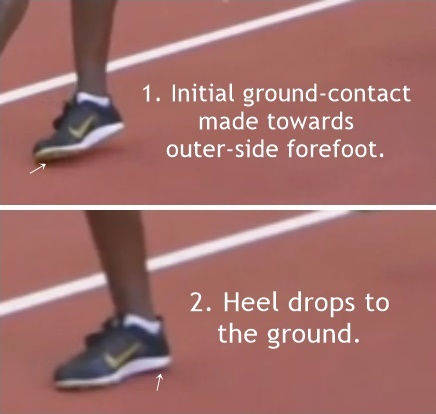 Moreover, landing with a forefoot strike during running also reduces impact by reducing foot-ground-contact time (the duration of time the foot spends on the ground). What this means is that forefoot striking during running results in a contact with the ground that is so brief that certain impact force variables are not fully produced.

The shortened foot-ground-contact duration would also leave less time for abnormal foot motions to take hold, thereby reducing the risk of over-pronation (extreme side-to-side heel motions) which in turn may dramatically reduce frictional and torsional forces and bending strain on the foot and leg.

Even better, forefoot running reduces the amount of braking at each step because it improves the foot’s positioning at touchdown by engaging an initial foot-strike position that is closer to the center of mass (upper body). It also improves stance-width, or footstep-width (prevents a crossover running gait) which makes the shin bone more vertical at touchdown. These stride parameters are associated with less forces acting on the leg, namely the knee as compared with heel strike running and is why forefoot running has attracted a lot of attention in preventing impact-related injuries.

All in all, landing with a forefoot strike when running seems to be the crucial mechanical component for a low-impact running as compared with heel strike running and may play a leading role in making it easier to handle faster, longer mileage with less worry of getting injured.

If you’ve enjoyed this content on forefoot running, you’ll love my YouTube content here, where I go into more detail about all the major advantages of forefoot running over heel strike running.

Lieberman, DE. (2012).What we can learn about running from barefoot running: an evolutionary medical perspective.