Back pain in lower spine is common in recreational runners when it really shouldn’t be. The best way to stop lower spine back pain in running from starting is by avoiding heel striking when you are running. Furthermore, landing with a toe strike, and not on the heel during running, was found to reduce loading on the lumbar spine. 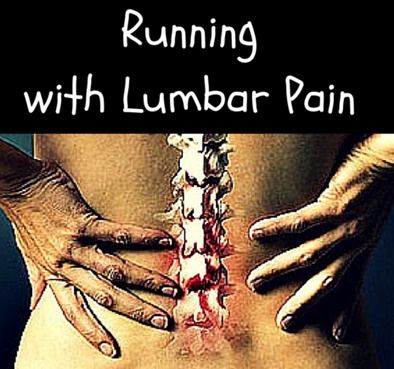 Back Pain in Lower Spine When Running

Toe strike running was found to reduce loads on the lumbar spine compared to heel strike running, suggesting that adopting a non-heel strike landing may bring relief to runners with low back pain.

A study by Delgado et al. found that when heel strike runners ran barefoot ‘on their toes without letting their heels touch the ground’, leg impact decreased at contact as well as shock attenuation -less shock was produced, therefore less shock needed was absorbed by the lumbar lordosis.

The researchers also pointed out that the toe strike landing led to positional changes in the lower back and pelvis during running.

Heel Strike Running: Bad News for the Back

In the same study, the heel strike runners had greater overall foot-ground impact than the toe strike runners, resulting in more shock that is attenuated by the lumbar lordosis. This finding is not the first to suggest that heel strike running is bad for the back.

In addition, the heel strike runners had greater overall low back excursion which may inflict a sizable demand for stability in the lumbar spine, according to the researchers.

The study’s findings were encouraging: the farther you land away from the heel when running, the lesser the risk of the weakening of the shock-absorbing structures in the back.

Moreover, these findings represent a watershed moment in biomechanical research on running, clearly demonstrating the possibly both forefoot running and toe strike running prevents or at least, delays impact-induced degenerative changes to the back.

Femur Fracture – Landing with a heel strike can literally break the strongest bone in the body.

Running with Music – Did you know that runners run best when they hear a pattern? Find out why running with music is not such a bad thing after all.

Running Shoes – My reviews on the minimalist shoes I feel are best for forefoot running.

Voloshin A, Wosk J. An in vivo study of low back pain and shock absorption in the human locomotor system. J Biomech. 1982;15:21–7.