should be avoided since it is no secret that heel strike running is related to greater force production than forefoot running.

When runners transition abruptly from running in a heavily cushioned, heeled shoe to heel striking in minimalist shoes, they almost immediately get injured.

Run in a Minimalist Shoe, Only if You Plan on Forefoot Running

The finding led scientist to have every reason to believe that runners should be running on their forefoot, not their heel.

This is why runners should never consider running with a heel strike in minimalist shoes, unless they adopt a forefoot strike.

Although, minimalist shoes have been implicated in enhancing running gait, a poor understanding of forefoot running mechanics undermines the health and performance assets of running in a minimalist shoe.

The thick heel of a running shoe has been linked to cause a heel strike landing during running, and minimalist shoes may not correct for heel strike either. This has been supported by many studies: 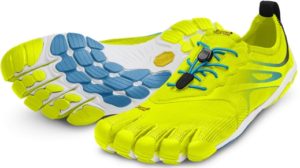 even though they were informed that most habitual minimalist runners are forefoot strikers.

A high vertical loading rate may result in lower leg injuries such as tibial stress fractures, patellofemoral pain syndrome, and plantar fasciitis, and is generally greater in a heel strike, not in a forefoot strike.

Why minimalist shoes do not always encourage a forefoot strike. The rubber outsole on a minimalist shoe dampens sensory input from the feet which may impede proper foot strike modification. To overcome this limitation, running barefoot in small amounts before going minimal, making the conscious effort to land on your forefoot is an effective way to ditch your heel strike.