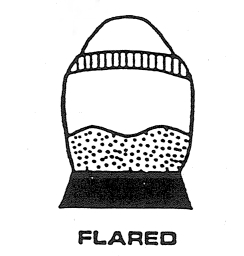 A study by Nigg and Bahlsen found the opposite. The researchers compared the effects of 3 heel construction types: conventional heel flare, rounded heel, and no heel flare on rearfoot movements and impact forces in heel strike runners.

The researchers found that runners who ran in shoes constructed with the conventional heel flare showed adverse events at touchdown.

The results suggests that conventional heel flare does not blunt external impact forces or irregular rearfoot movements during running, but disables a runner from landing with normal impact resistance.

Runners, unaware of their biomechanical onslaught caused by conventional heel flare, inflict damage that accumulates and contributes to progressive injury during running.

Footwear manufacturers condition runners to accept that heel stabilizers, such as the conventional heel flare, is needed to avoid overpronation. But, runners susceptible to overpronation are exposed to greater rates of loading and impact forces in running shoes with flared heels.

Studies conducted over the past few years show that pure minimalist shoes, not only helps curb overpronation by improving foot strength, but scales down vertical impact forces by reinforcing a non-heel strike landing.

Proprioception of the Feet – Tactile feedback on the feet important for ankle function.

Knee Osteoarthritis – If you are wearing cushioned running shoes to protect your knees, stop that today!

Barefoot and Injured – How barefoot runners can easily avoid injury.