Many of the root causes of most running-related injuries are determined by how much a runner pronates. Pronation refers to the natural side-to-side motions of the back of the foot during the touchdown and stance phases of walking and running and is one of the body’s natural mechanical defenses that provides mechanical support and impact protection. Therefore, pronation does have an important functional relevance for injury prevention. However, many factors can affect pronation during running, and foot strike pattern is one of them.

Too much pronation (also referred to as overpronation or hyper pronation) during running is a well-known risk factor for a long-list of injuries, including Achilles tendonosis, shin splints and runner’s knee. This is because when the foot hyper pronates with the ground during running, the foot is essentially wrestling with the ground too intensively, shifting in extreme positions, leading to poor impact absorption, thereby amplifying impact up the leg.

Also, hyper pronation during running may increase footstep instability which may have a profound ripple effect up the leg, resulting in greater torque, rotational stress and bending strain to reach a level of an injury on the Achilles tendon, shins and knees. From this, it’s easy to understand the list of things that can go when the foot hyper pronates during running. 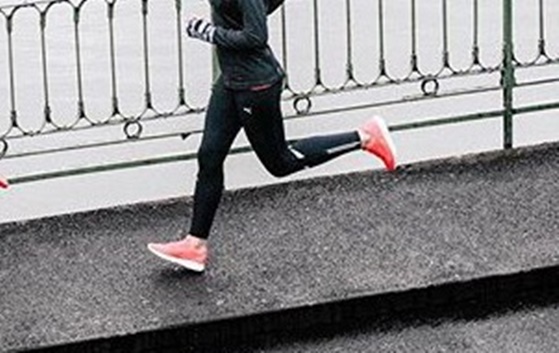 In fact, running with a heel strike (shown above) may over-stress the foot and leg by pushing pronation out of a safer range as compared with forefoot strike running.

For example, some lines of research, which are listed below the article, discovered that during the stance phase (pronation phase) of heel strike running, the forefoot (the front of the foot) rapidly rotated outward away from the mid-line as the body-weight passed over the foot from heel-to-toe (shown below). This also caused the arch to fully collapse which forced the medial border of the foot (the inner border of the foot extending from the heel to the big toe) to absorb excessive levels of abnormal stress.

This excessive abnormal forefoot stress due to the arch collapsing too much during the stance phase in heel strike running also increased frictional forces on the foot as well. The cumulative effect of these physical stressors at the foot in heel strike running amplified impact stress on the ankle and shin and may also up the odds for medial shin splints.

One way to put a firmer hold on pronation during running is to land with a forefoot strike, shown below. For one, forefoot running may prevent pronation from going wrong because reductions in ground-contact time of the foot is a natural compliment response of landing forefoot-first during running. In this way, there’s less time for pronatory mobility impairments to take hold.

In contrast, heel strike running naturally results in a prolonged ground-contact time where the foot spends more time grappling with the ground which may free up more time for abnormal foot postures to take hold.

Secondly, research has found that in forefoot running the medial aspect of the foot does not endure a rapid rise in abnormal loading during the pronation phase. This is because there may be less overall pronatory support demands required of the medial foot during the support phase in forefoot running. In other words, there may be less pronatory effort of the foot needed for stability and impact attenuation in forefoot running because the mechanical components of forefoot striking when running results in an interaction of the foot with the ground that is so brief that certain forms of impact forces and mechanical entanglements are not full produced like they are in heel strike running. This is why the lower leg may be less prone to overuse and overloading in forefoot running, potentially making it easier to avoid lower leg injuries, like medial shins splints than in heel strike running.

If you’ve enjoyed this article, you’ll love my content over at my YouTube channel, here, where I discuss more about the benefits of forefoot running and the health harming effects of heel strike running.