Why No Impact Transient in Forefoot Striking

In forefoot striking, the foot ‘swoops’ down to the ground, making initial contact on the balls of the foot, then the rest of the foot is lowered down.  The movement path of the foot in a forefoot strike (shown below), reduces braking and lowers the rapid force of impact regardless of surface hardness. 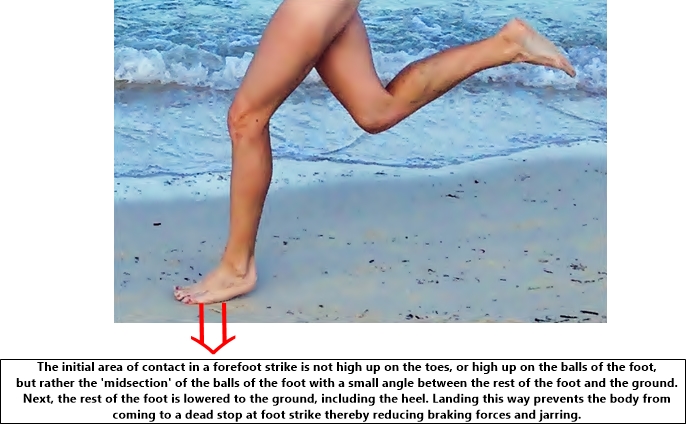 Below shows the figures from the study comparing the impact transient in heel striking and lack-thereof in a forefoot strike:

Since the impact transient is eliminated in a forefoot strike, forefoot runners tend to land lightly and gently as other mammals who also do not generate ground reaction forces during running -mammals don’t ‘heel strike’ when they run, just watch your dog or cat run to see, they land on the more anterior part of the foot, or paw, hoof, etc.

The Harvard study suggested that since the forefoot runners ran with less impact and no peak force production, cushioned shoes may not be needed to dampen impact even on hard surfaces such as a steel plate.

These findings may imply that running on harder surfaces, such as the road,  may not be the main culprit in causing your injuries.  It is most likely how your foot strikes the ground that determines impact and thus injury.

The key point to always remember is that heel striking produces a peak impact force which forefoot striking does not.  As I always say, I would like to run with the foot-strike that produces the least amount of force.  Therefore, in theory, forefoot runners may virtually run anywhere without having to experience the physical trauma related to the peak impact force.

Run Forefoot Because You’re Faster Than You Think