Heel strikers generate compressive forces on the knee joint by over-striding and maintaining a strike position where the heel contacts the ground in front of the knee. 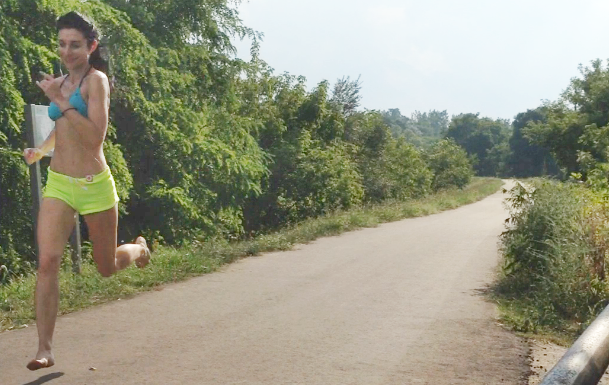 In forefoot running (shown below) where compressive forces are very low, or absent, foot strike position occurs under, or close to the knee, not in front as in heel striking.

To land on your forefoot, the knee needs to bend slightly whereby even the slightest bend in the knee at foot strike promotes increases shock absorption and elastic energy  return.

The Real Cause of Runners Knee: Increased Weekly Mileage, Or Incorrect Foot Strike?

Past studies have linked increased weekly mileage to runners knee.  However, many of these studies involved heel strikers, not forefoot strikers.

The evidence presented above should make heel strikers think seriously about the unpleasant side effects on the knee with regards to heel striking.  But, if you are a heel striker who has never experienced knee injuries, than scrap that suggestion and keep doing what you are doing.

Yet, evidence supporting the potential health benefits of forefoot running could be a major tool in shaping training methods to improve running form and possibly, save your knees.

More to Read at Run Forefoot:

How NOT to Swing Your Arms While Running

Why Care About Proprioception?

How to Run Barefoot on Pavement

Neptune et al. (2000). The influence of orthotic devices and vastus medialis strength and timing on patellofemoral loads during running.