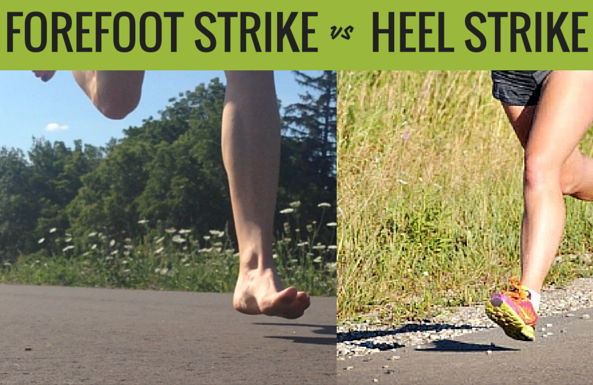 Heel Strike vs Forefoot Strike – How They Differ Mechanically

When the basic structure of the foot and leg are simply diagrammed, the mechanics become very revealing. So let’s look at the basic reaction forces on the foot during heel strike running compared to forefoot running. 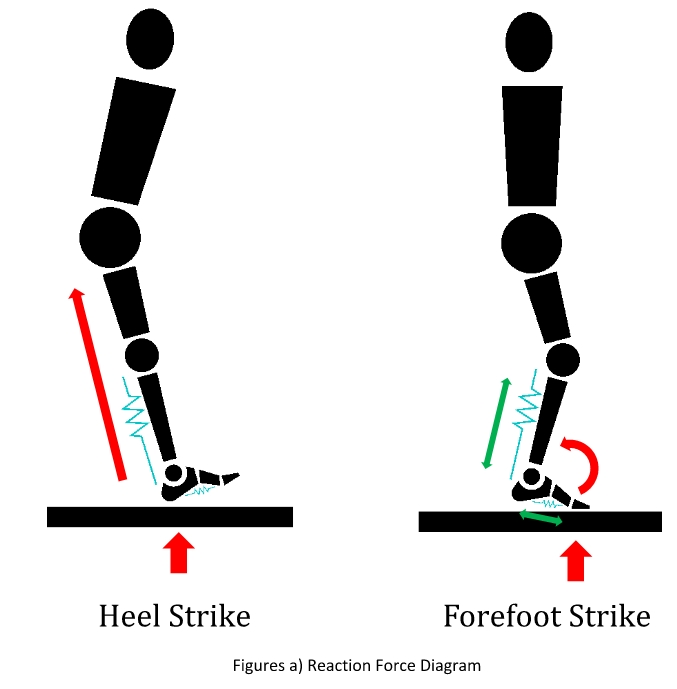 Both of these diagrams depict the runner at the first point of contact during the running stride. The circles represent the major load bearing joints; the ankle, knee, and hip. The foot is composed of many bones and joints, but I have simplified them for this demonstration. Also note, I have represented the calf muscles as a diagrammed spring, and I have done the same for the tendons on the bottom of the foot.

With the heel hitting first, the strong springy tendons underneath the foot are flopping in the breeze, doing nothing. Also note that all the muscles of the leg are mostly relaxed, allowing the straightness of the leg to take all the shock through the bones.

Due to the location of the heel in relation to the ankle, the calf muscle is actually being squeezed together, which does nothing for taking any shock. Although the diagram is representing the calf as a spring, muscles are designed to take load in tension only. So a muscle is really like a stretchy rope. Therefore, when a muscle is compressed, it is in a relaxed state doing nothing. The analogy is that you cannot get any work by pushing on a rope.

Again looking at the heel strike diagram, note the leg is forward with the point of impact in front of the pelvis, and with the disadvantage of the force being directed backwards. In order to keep forward motion, the upper body must compensate by leaning forward, and thus the lower back is constantly working to keep the body in this position. This could lead to a sore back by overworking these muscles, and with the added disadvantage of the direct shock created by the straight leg heel strike, those forces easily propagating up the leg and to the spine.

The red arrow represents the 12XBW force that translates up the leg. Because there is little cushioning effect by the bones, this full force is translated to the pelvis, spine and internal organs.

I also mentioned the internal organs receive impact loading as well, and this may lead to a whole host of problems. It is my opinion that runner’s colitis and uterine prolapsed could be related to the higher impacts of heel strike running.

Often, women are discouraged from running after having a child due to the possible onset of uterine prolapse. These are only my presumptions, but I would think the medical community would want to investigate all of these correlations further.

Now, let’s talk about the forefoot strike runner. The point of impact is isolated to the forefoot, with no sudden impact. The force diagrams¹ in figures b) and c) show a smooth increase and decrease in the forefoot, while the heel strike impact has a dramatic increase of force. As shown above, this force is not directed up the leg shaft, but levered through the forefoot bones.

So conversely to the heel strike, the major load bearing joints are allowed to bend and allow the tendons and muscles to take on the loading.

And finally the gluteus maximus, the largest muscle in the body is also engaged when the hip is allowed to bend, and thereby taking more impact loading. Basically, the entire leg is allowed to act as one big spring which decreases the impact to all of the joints, lower back and internal organs.

As mentioned above, the problems that could be associated with high impact heel strike running, such as multiple foot ailments, degenerative joint arthritis, lower back pain, various organ maladies, and probably many others, may be alleviated by reducing the shock. This is what shoe manufactures have been working on since the 70’s.

The problem is that no matter how springy a material that you could design in a 2 inch thick heel, it could never equal the 3 foot length of the leg and muscles allowed to absorb shock through the proper running technique of forefoot running. But, why does this running technique seem so new, and was man really meant to run in the first place? This question easily comes up in mind of the struggling heel strike runner, but running is 4 million years old.

Click here to read my initial experience with forefoot running as well as some helpful tips to help you transition safely.

Reasons Why I believe Forefoot Running is the Proper Running Style

How to Run Safer at Night

Where to Buy Vibram Five Fingers