In addition to projecting unusual high amounts of damaging impact on the leg another reason heel strike running is bad for your legs is that it increases the risk of a hyper-extension injury to multiple sites across the leg. The reason for this is landing far back on your heel when running, provides a very small landing area on the foot that the entire body must balance on. In this condition, mechanical demands increase on the leg because the small landing area on the foot forces the hip, knee and ankle to harder to balance the body at each step.

At landing in heel strike running, the stance leg becomes increasingly unstable as the entire weight of the body loads onto and balances on a smaller support base (the back of the heel), while under high impact conditions. These runners don’t notice the stability impairments and uneven stress occurring on the leg at landing, but the additional strain coming from the leg’s over-compensatory efforts to maintain balance has been linked to hyperextension injury.

A closer inspection of this came from a detailed study in the Journal of Sports Sciences which found landing heel-first when running increased knee and hip excursions (a deviation from a regular pattern). The increases in knee and hip excursion were even more pronounced during the absorption phase (a phase of running where the lower leg must be as stable as possible to sufficiently absorb impact). This means landing with a heel strike when running creates a wobbly support surface on the heel which causes the joints of the lower leg to move too much about their axis where the leg can no longer adequately absorb impact.

Evidence that heel strike running does not increase the risk of injury is, at best, extremely shaky (pun intended). The reality is, this work joins other emerging studies showing that the damaging effects of heel strike running goes beyond the excessive impact produced at landing, injuries can also be attributed to the mechanical misalignment of the joints in the lower leg also.

To steer clear of all these injurious risk factors when running, avoid landing heel-first and instead land with a forefoot strike because the forefoot strike is a mechanical imperative that allows the joints of the lower leg to hold more firm in a safer range of tolerance. This is because, for one, landing forefoot-first when running naturally provides more surface area on the foot to balance stably on. 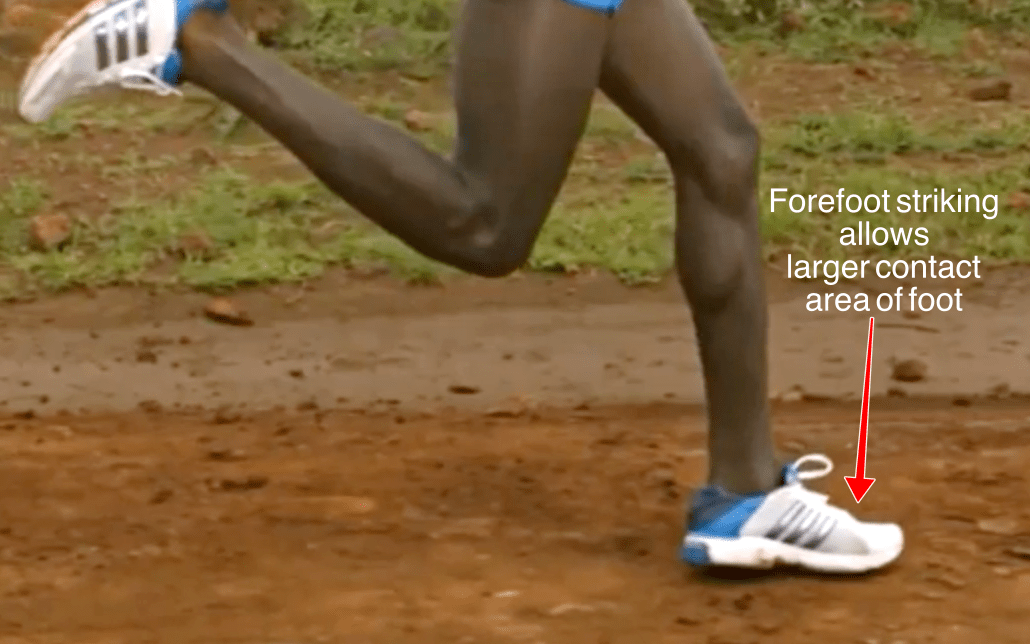 The larger foot contact area in forefoot running does more to limit straining knee and hip displacement, which is why one of the best changes to your running form is the forefoot strike!

For another, the knee naturally bends more when you land forefoot-first when running. This was found to have a strong stabilizing effect on the lower leg by positioning the shin more vertically at landing, not horizontally, like in a heel strike landing. 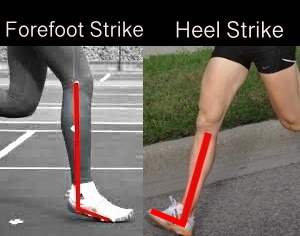 At the same time, the foot pronates less in forefoot running, meaning the foot doesn’t shift into extreme positions like it does in heel strike running. The reduced foot pronation reduces bending strain, rotational forces and other unpleasant stressors that arise when irregular movement patterns and postures of the foot occur. In this way, the leg does not have to overwork to try and stabilize the foot.

Bottom line, there are significantly notable differences between forefoot running vs heel strike running, which is why foot strike pattern really matters!

Heel strike running comes with substantial mechanical negatives that do not sustain well whereas the mechanical components of forefoot running removes a lot of wasted movements of the leg while improving the shock absorbing characteristics of the knee. This is why there’s always less stressors acting across the leg and that switching from heel strike to a forefoot strike is the best course of action to prevent injury.

To gain more understanding on why forefoot running works best, here are all my articles on the evidence-based reasons forefoot running will surely keep injury at bay while consistently boosting your performance!