Heel strike running may be a strong risk factor for Achilles heel tendonitis because it may cause excessive heel movements that may put heavier loads and bending strain on the Achilles tendon as compared with forefoot running. 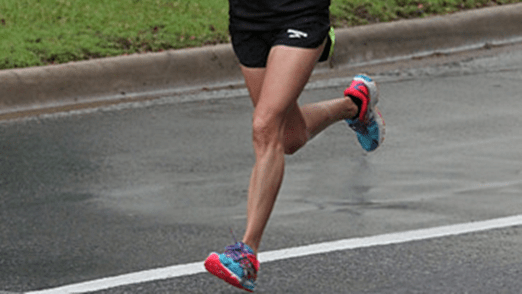 When you run with a heel strike, your foot tends to spend more time on the ground during the stance phase which may shore up more time for abnormal rear-foot (heel) motions and postures to take hold.

In fact, research (listed below the article) has found that the increased ground-contact time duration of the foot in heel strike running may cause the heel to rapidly jerk and whip which may place greater bending and twisting strain on the Achilles tendon.

For instance, a 2015 study in the journal Physical Medicine and Rehabilitation found that heel strike runners had a pronounced heel whip angle:

This data suggests that, one way or another, the mechanical components of heel strike running may cause the heel to forcibly shift which can be more stressful on the Achilles tendon.

Related research indicated that increases in heel whip during running may trigger both medial and lateral rotation of the foot in the transverse plane (i.e. horizontal plane; side-to-side motions) during the initial swing phase of heel strike running which may strongly alter the position of the Achilles and may place additional loading across the tendon.

These findings are inline with the data trend showing that Achilles tendon injuries tend to be high in heel strike runners even with all the advancements in running shoe technology!

Another factor which may worsen heel whipping in heel strike running is thick, cushioned heeled running shoes because they also increase ground-contact time as compared with running barefoot, or in minimalist shoes, which often encourage lighter, shorter foot-ground interactions.

One approach that may be effective in preventing straining heel whipping motions during running is to change your heel strike to a forefoot strike. For one, by impact standards, forefoot running appears to be a much less force-intensive style of running as compared with heel strike running. For another, forefoot running reduces ground-contact time of the foot which may effectively tighten up abnormal heel motions and may overall allow the foot to hold more firm against straining movements.  In this way, the Achilles tendon may be less prone to injury.

Most interesting, it should be noted that running barefoot or in barefoot-like minimalist running shoes not only helps you nail down a proper forefoot strike landing, it also has a large effect on directly strengthening the foot’s tendons, muscles, especially the prontory muscles, plantar flexors, toe flexors and bones whereby the increases in strength in these areas are all associated with improved pronatory (side to side motions of the foot) control.

Furthermore, when it comes to reducing abnormal heel motions through minimizing ground-contact time, barefoot running influences the reflexive system by switching on a range of underfoot sensory nerves that get the withdrawal retraction of the foot engaged at a much higher level, thereby triggering a faster removal of the foot off the ground, helping to reduce ground-contact time.

This is why barefoot/minimalist walking and running remains critically important for improving reflexive control of your leg swing and foot strike mechanics and for improving or even reversing irregularities in foot structure and function in ways that greatly enhances footstep stability, potentially making the Achilles tendon less vulnerable to injury.