Outside hip pain is a common problem in runners, but I know a lot of the times, it’s due to heel strike running. Optimal running begins with how your foot strikes the ground. Ideally, you want to land on your forefoot to avoid mechanical overload on areas such as the knees and hips. It’s different in heel strike running however, because there are more mechanical loads in the form of braking forces and the impact transient, and hyperpronation of the foot, both of which are risk factors for trochanteric bursitis, or outside of hip pain. 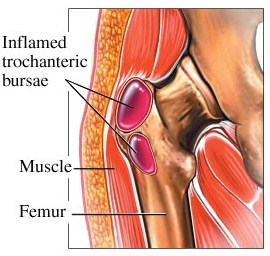 Outside Hip Pain When Running

When you run with a heel strike, your muscles and bones are battling to deflect the impact. It is well established that the heel strike-impact and/or the hyperpronation triggered by landing with a heel strike in soft cushioned running shoes may irritate a fluid-filled sac overlying the trochanter, causing it to become inflamed, resulting in trochanteric bursitis, a condition associated with tightness and inflexibility of the IT band (Weinstein, 2015). Not only does trichanteric bursitis cause outside hip pain, it may cause the IT band to contract and become tight, thereby amplifying hip pain (Weinstein, 2015).  In most cases, healthcare professionals would suggest stretches for the IT band as the preferred form of treatment, but the real problem is that the body has not evolved a mechanism to dampen the sock-wave produced at heel strike. This is why there’s no end to the overload on the body if you have a heel strike running style.

Landing with a forefoot strike is at the heart of low impact intensity and because it eliminates the heel strike transient, forefoot running indeed positively affects hip-joint health. Researchers are beginning to notice that the joints are more protected when a forefoot strike landing is used during running, especially if the runner runs barefoot or in minimalist running shoes.

So, if you have outside of the hip pain, think about how your foot is landing on the ground next time you are out running. And, if you are heel striking, stop that now, and land with a forefoot strike, and here’s what that looks like.

More on Why You Should NOT Be Heel Striking:

Lower Back Pain by Spine