Hip joint discomfort is a common problem in shod runners (runners who wear running shoes). However, barefoot running –which typically involves a forefoot strike — can stave off ailments of the hip caused by shod-heel strike running.

In a new study, Fleming et al,. found that shod runners with no experience with minimalist or barefoot running, had a marked reduction in hip demand and loading as compared with shod running.

2D kinematic data recordings were made of the lower limb and revealed that changes in hip kinematics occurred within the first 1- minute of barefoot running, suggesting that barefoot running triggers naturally occurring acute responses to create a safer landing strategy.

Interestingly, the researchers found that reduced hip range of motion contributed to reductions in hip demand and loading in the barefoot runners. The notion of better, or more hip range of motion was thought to be fundamental in running. However, the findings sort of knocks it off its pedestal. 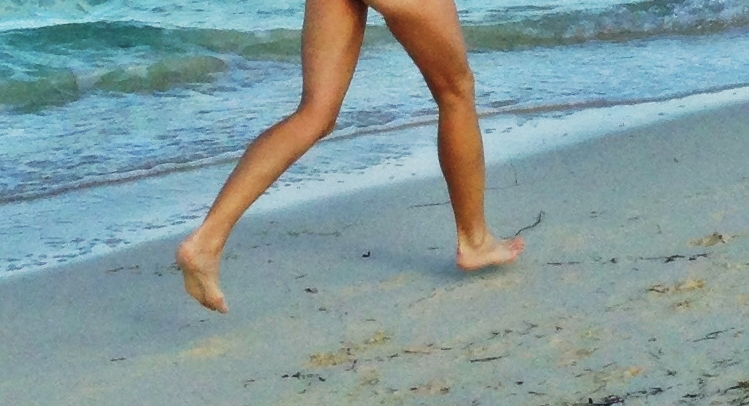 Another benefit of barefoot running may derive from the fact that the braking phase is much smaller, thereby reducing effort on the hip as compared with shod running (Warne & Warrington, 2014). Hip demand and loading however, may be exacerbated when transitioning from shod to minimalist running –mainly because minimalist footwear does not always elicit instant alterations in hip kinematics as compared with barefoot running. So what is the alternative? To strengthen neuromuscular processes that regulate hip kinematics, run barefoot in graded amounts before switching from cushioned shod to minimalist shod.

Ultimately, most habitually barefoot runners use a forefoot strike, which attenuate impact forces and diverts demand from the hips to the ankles more effectively than a heel strike (Daoud et al. 2012; Lieberman et al., 2010; Robbins & Hanna, 1987).

Because initial neuromuscular and kinematic responses are pronounced in barefoot running, shod runners suffering from hip pain or injury might show rapid improvements by taking off their shoes. Likewise, barefoot running will give shod runners the skills they need to persistently run forefoot without injury in minimalist footwear.
More From Run Forefoot:

Shoes Not for Forefoot Running

Is Forefoot Running on a Treadmill Safe?