1. increasing intramuscular pressure of the lower leg due to over-striding

2. straining of the connective tissue surrounding the tibia due to repeated toe-lifting upon heel strike 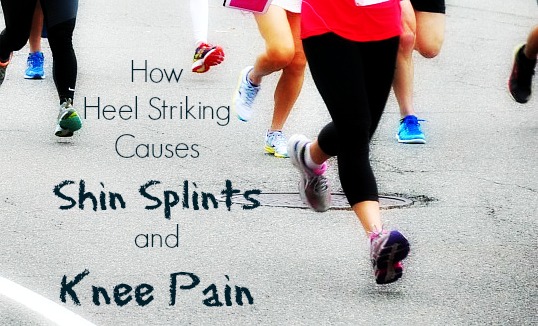 Over-striding in heel striking has been shown to produce a loading rate 70-100 body weights per second, which may increase intramuscular pressure of the lower leg, possibly influencing shin pain.

Another mechanism of how heel strikers may be more prone to shin pain than other styles of running is by lifting the forefoot and toes up at heel strike, shown below:

Above, shows a heel striker lifting the forefoot up, or curling the toes back at heel strike.  What is so bad about that?  The foot is in a highly strained dorsiflexed position which essentially strains the connective muscular tissue of the shin (tibia) which may lead to cumulative micro-trauma and pre-mature muscular fatigue.

To gain a better appreciation of this, sit down in a chair and lift your forefoot up off the ground while keeping your heel on the ground, also known as toe-lift exercises.  Do this for a few minutes and you will begin to experience cramping in your shin.  Now, do that over the duration of a marathon and see how your shins feel.

Unfortunately, the shin area appears to have limited capacity for the pressure accumulated at heel strike and most likely accounts for an increase in compartmental pressures of the lower leg.

Most Joggers Are Heel Strikers.  Most Joggers Get Shin Splints.  What About Forefoot Strikers?

Shin splits is one of the most common running injuries, and what a coincidence, the majority of recreational runners are heel strikers.  Though, the evidence is correlational, research from leading institutions are beginning to show that shin splints might be a heel strikers injury.

Our lower extremities may not be anatomically adept to withstand the loading and force from heel striking.  Dr. Daniel Lieberman, professor of human evolutionary biology at Harvard University, has made numerous compelling publications on the various forces associated with heel striking and has found that forefoot strikers generate smaller collision forces than heel strikers.  A reduction in collision forces could reduce compartmental pressures, and even shin pain.

Also, unlike heel striking, a forefoot strike involves a more relaxed plantarflexed foot upon foot-strike which may relieve strain from the shin.  From a mechanical perspective, the heel strike running technique may actually have limited usefulness to help alleviate repetitive loading and tibial strain implicated in shin splints.

More For You at Run Forefoot:

Thacker et al. The prevention of shin splints in sports:a systematic review of literature. Medicine and Science in Sports and Exercise (2002);32-40.