Forefoot running may be better than heel striking in many ways. For one, humans might have the fundamental anatomical features better suited for a forefoot strike rather than a heel strike. 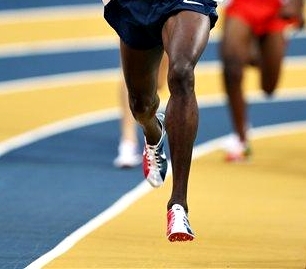 Secondly, if humans evolved to run

, our lower extremities must have been evolutionary designed through selective pressures to foster running comfortably over long distances (remember, our ancestors ran barefoot

Forefoot striking seems to be more relevant biomechanically and energetically as it may enable greater potential elastic energy storage in the Achilles tendon than other styles of running.  And, again, it appears to be less forceful:

In a forefoot strike, the impact force is significantly reduced because the knee is bent at foot strike and the foot collides with the ground in a position that is more ‘parallel’ than ‘head on’ with the ground as in heel striking. What am I talking about?

The illustration below, shows a forefoot strike. Or does it? It looks like the runner may contact the ground heel first. 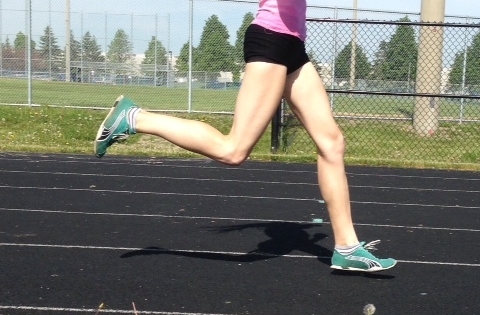 However, if you look closely (below), you will see that the foot is still airborne and is aligned ‘parallel’ with the ground.  In this position, the foot is ready to make initial contact with the ground on the forefoot followed by the rest of the foot quickly flattening to the ground. Why is this part important? 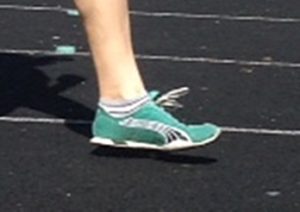 Left, shows the foot hovering ‘parallel’ to the ground before landing on the front part of the foot.

Yet, some runners may think that a forefoot strike involves landing higher up on the toes as shown below:

Left, shows how a forefoot strike should come together. The knee is slightly bent at foot strike, and the foot is in a minor plantar flexed position, meaning Meb is not landing high up on his toes, but rather on the forefoot-midfoot area.

You get an appreciation of the relaxation in Meb’s legs.  Ultimately, this is why I believe that forefoot running may be better.

The mechanics of a forefoot strike may give runners a stronger, safer foundation with each step.

More on the Health Benefits of Forefoot Running:

Run Forefoot, Because You Are Faster Than You Think!