I’d like to point out another reason why heel striking is bad for running, especially for running performance, and a lot of it pertains to how heel strike running may cause your legs to move less efficiently.

In heel strike running, impact is so high that it causes soft tissue compartments and bones to vibrate, which affects motor nerve cell communication. So, what do nerve cells do in this case? They do nothing. In fact, nerve cell conduction velocity is reduced. 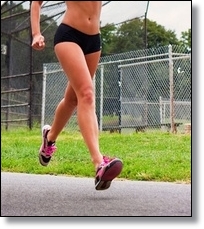 Normally, a nerve fires a strong, fast signal to other nerves for a movement to occur.  For the signal to get from point A to point B quickly and efficiently, signal conduction must be strong and secure. The signal is disrupted by high vibrational frequencies which impair conduction, thus slowing signal transmission.

Repeated vibrations in soft tissue compartments may cause ‘blips’ in nerve signalling and as a consequence, may impair, or weaken the strength of the neuromuscular signal, causing the body to move less efficiently.

However, a mechanism of the muscles known as muscle tuning minimizes the frequency of vibrations:

It is fair to assume that some heel strikers might better able to ‘deflect’ the impact associated with heel striking better than others.  However, when fatigue sets in when running, movement naturally becomes slightly rigid, posture becomes stooped, and ground-contact time increases, and so does impact.

If you like my content here, you’ll love the Run Forefoot Facebook Page, where it’s a great place to ask questions about forefoot running, injury and proper footwear. I’ll be happy to answer them for ya!