Many runners have different foot strike patterns. Most recreational runners heel strike whereas some runners land with a forefoot strike. Of significance though, the majority of the BEST short, middle and long distance runners typically land with a forefoot strike. However, elite marathoners, for example, who do heel strike rarely podium on a consistent-basis on the world stage and rarely do they break world records.

Elite runners who heel strike also seem to get dinged with a greater frequency of injuries and more severe injuries, too, such as a femur fracture and a significant loss of knee cartilage. In contrast, the vast majority of world record holders at the 5,000-m, 10,000-m, half-marathon and marathon are not heel strike runners and do not suffer the same high frequency of injuries and their injuries are less severe as well.

In recent years, a number of published studies (references can be found below the article), have showed that there are a different variety of impact forces uniquely produced in heel strike running that are either not produced at all or occur at a much less intensity in forefoot running.

A Closer Look at the Heel Strike

At heel landing in heel strike running, excessive vertical impacts and higher rates of loading, especially on the knee are produced as compared with forefoot running. Even worse, heel strike running at faster speeds causes the intensity of these forces to dramatically increase, especially if you’re overweight, and at any point in this process may introduce additional stressors on the soft tissues, muscles, tendons and bones as compared with forefoot running.

It’s for these reasons that heel strike runners have to rely on running shoes with thick under-heel cushioning to cope with the distinctive impact forces that are classic features of heel striking during running. However, we are quickly learning that increased under-heel cushion thickness does not consistently prevent the impact burden of running with a heel strike; it actually encourages a greater downward force of the heel onto the ground and generates forces that are stronger than the original strong forces of landing heel-first when running. This injurious effect is especially true when, again, running at faster speeds with a heel strike.

Another negative aspect of heel strike running that has attracted a lot of attention is that it may encourage maximum knee extension at touchdown, which is best explained in this video:

As seen in the clip, in heel strike running, making the effort to land heel-first usually requires the knee of the landing foot to unbend and fully straighten out which actually forces the landing foot to fling out farther in front of your center mass (torso and head). This creates a large distance separation between the landing foot and your center mass which in consequence produces a rapid deceleration, or heavy brake force of much greater magnitude, intensity and duration that places a significantly heavy load on the knee as compared with forefoot running.

Shalane’s not the only heel strike runner slaughtered with severe running injuries. Canadian marathoner, Krista Duchene, is also a heel-pounder who broke her femur and underwent surgery to repair the break with a plate and three screws. American marathoner Meb Keflezighi was also a heel strike runner, always plagued with harsh injuries until he corrected his heel strike to land more flat-footed. From here, he suffered fewer injuries of less severity and went on to win the Boston marathon, becoming the first American male in decades to do so!

A Closer Look at the Forefoot Strike

You’ll notice that in a forefoot strike landing (shown below), initial ground-contact is NOT made high up on the toes, rather its made much lower on the forefoot, almost like a mid-foot strike. That is very key to always remember. 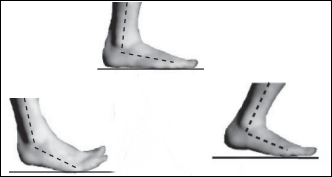 What’s so special about the precise movement path of the foot when it connects with the ground in forefoot strike running? It has a large effect on naturally reducing stride length, it widens your stance width and it increases your cadence, all of which are mechanical outputs on record for being to able to decrease, or even fully blunt many impact force variables during running.

Essentially, forefoot running can be thought of as a key organizer of more functional mechanics that may leave you less vulnerable to the ravages of the road and even more essential, it’s the reason that the forefoot strike is the preferred foot strike pattern of many of the great distance runners history has ever seen: Eluid Kipchoge, Genzebe Dibaba, Haile Gebrselassie, Tirunesh Dibaba, Galen Rupp, Paul Radcliffe, Bernard Lagat, Tiki Gelana, Molly Huddle ~check out any of these runners on YouTube and you will see that they’re not heel striking when they run!

On a personal note, I was a heel strike runner who suffered all kinds of injuries until I learned that forefoot running was much less force intensive and risky. Ever since I’ve switched to forefoot running, I’ve left the injuries behind and my performance times have improved dramatically. I can do all kinds of speed sessions without worry of destroying my knees.

I like to run barefoot as much as I can as compelling evidence shows that running barefoot has power beneficial effects for improving your forefoot strike precision, stride-length control, postural positioning, faster reaction time and balance stability. You also develop stronger awareness of your foot’s landing intensity and sensibility about the forces acting on your joints. Moreover, published studies show that just walking barefoot, especially on uneven surfaces, may improve or even reverse irregularities in foot structure and function caused by modern footwear and may ultimately influence the feet to operate at the level of better spring efficiency when you run.

It’s because of my amazingly positive experience with forefoot running that drives me to get runners better informed about forefoot running vs heel strike running and to really inspire people that running is NOT hard on the body, if done properly!

Above all, the implied lesson from all this is that foot strike may really matter when it comes to improving your run times with little strife and that forefoot running may sustain better long-term and may be the surest way to conquer more progress with little worry of injury setbacks.

If you’d like to learn more about forefoot strike vs heel strike running, you’ll love the content over at my YouTube channel, here, where I talk extensively about the evidence-based facts about the potential performance and health benefits of forefoot running and barefoot running.