Among the many ways heel striking when running will get you injured, the jerky movements of this running style fosters chronic injuries that keeps a runner side-lined for a long time. Ultimately, from a health and performance perspective, heel strike running really brings no reward.

Why Heel Striking Has You Injured

In heel strike running, the greatest jerky movements occur at touchdown. This is also where the most joint loading occurs as well as the heel strike-transient [1].

The smoother part of heel strike running occurs during the swing phase –the phase of running-gait associated with the least amount of injuries [2], but this means nothing because much of the damage is done at heel strike.

In addition, the braking force produced at heel strike is associated with a high jerk value which negates stride smoothness parameters, such as acceleration. 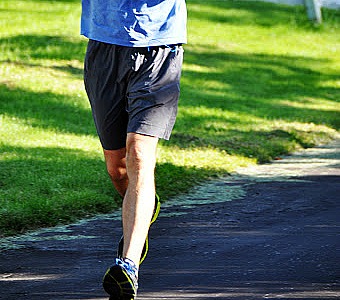 In recent years, research has strongly correlated this braking force with a number of running injuries.

Thus, minimizing jerky movements by reducing the braking force at touchdown during running minimizes the risk of injury.

The winning formula for smoothing-out the chaotic landing at heel strike is to land on the forefoot, specifically in a minimalist shoe, or barefoot, which helps establish more control over a proper forefoot strike and thus a smoother landing.

Forefoot running is, in a sense, the sunnier side of running as it minimizes the darker features of heel strike running. For instance, the jerky movements at heel strike are related to insufficient coordination -this is why heel strike runners look less coordinated and more ‘choppy’ with their movements compared to habitual forefoot runners who have a much more fluid gait.

How to be a Better for Forefoot Runner