As soon as I transitioned from conventional footwear to minimalism (footwear without arch support and heel cushioning) my arches were achy. This under-foot pain should be embraced because it means the arch along with the soft tissues that help support the arch are getting stronger. This is why the last thing you should do to alleviate the pain is revert to wearing arch-supportive footwear or thickly padded footwear because your arches will only get weaker.

The best thing you can do is continue with your minimalist journey. You must always remember that your feet will get stronger in minimalist shoes. They will even become stronger much quicker if you walk barefoot, especially outdoors on uneven surfaces. 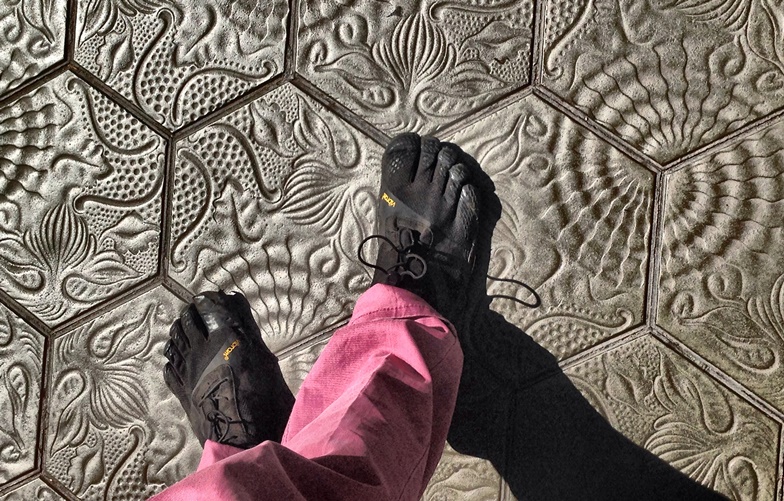 I became more confident about the health benefits of minimalism when I came across a study by Miller at el. 2014 which showed that runners feet are better able to improve in strength while wearing minimalist shoes on a daily basis.

Their study mentioned that humans walked and ran barefoot and in minimalist footwear throughout much of our evolution and that today’s modern athletic footwear is drastically different from that of our ancestors, suggesting that our feet have not yet evolved to run safely in footwear with ‘technology advancements’ and that our feet much prefer a more simplistic design of a shoe. This is why most runners get injured.

In addition, the researchers postulated that arch-supportive footwear with thick padding reduces workload from the feet, which is part of why these shoes interfere with the foot’s normal function, especially in the arch, which can hinder normal arch function and can lead to pain and injury when running. Overall, the foot is less resilient to stress, and the arch is more prone to collapsing.

The importance of minimalist footwear is that they reverse this intrinsic muscle weakness of the feet.

The runners in minimalist shoes showed exceptional improvements in foot strength, specifically in the toes and the metatarsal heads as well as gains in foot muscle volume as compared with the control group of runners. Based on their unsurprising data, the researchers concluded that runners who wear conventional running shoes will attain stronger feet and arches if they wear minimalist running shoes.

The researchers also revealed that the continuous use of minimalist footwear results in positive anatomical changes in the feet. These findings add a stronger scientific voice to the running community whereby strong feet are one of the most fundamental ways a runner can avoid injury because a stronger foot is better able to control unwanted movements of the rearfoot, even unwanted movements in the knee-joint.

Minimalism is one of the most fundamental ways a runner can avoid injury. Minimalist running has been an area of interest in biomechanical research as minimalist shoes can promote healthy, stronger feet in runners.

Why Land on the Outside of Your Forefoot