Heel pain due to running is actually due to running in the wrong shoe. A new study confirms that the higher the heel elevation of a running shoe, the higher you’ll land on your heel, and the result is a less flat foot strike causing the massive force at heel strike to overwhelm the heel pad. 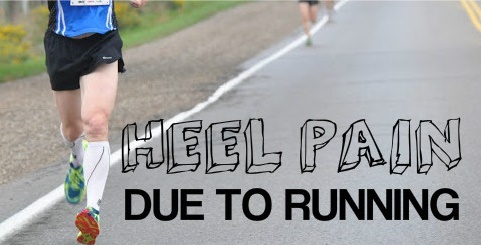 Heel Pain Due to Running in the Wrong Shoes

A study by Jimenez-Munoz et al (2015), investigated the effects of running barefoot vs running in shoes on foot strike. The researchers found that a higher heel strike angle was more frequent in running shoes, especially those with a higher heel height, whereas barefoot running resulted in a significantly flatter foot strike, suggesting that impact forces would be less intensified on the heel during barefoot running because a flatter foot strike at touchdown increases the surface area for force dissipation.

Their results are in line with past reports which found that 70-85% of runners who wore cushioned heeled running shoes heel strike (Hasegawa et al. 2007), and sustain numerous injuries. Their results are also consistent with other reports which have found a forefoot strike is commonly adopted when a shod runner runs barefoot (Hamill et al. 2011), suggesting that the heel pad is sensitive and a non-heel strike landing is a safer means of protecting the heel pad for degrading on hard surfaces.

If you don’t want to go barefoot when you run, you’ll love these barefoot-inspired running shoes.

How the Braking Phase in Heel Running Does Damage

5+ Ways to Fuel Before a Run