One of the most important ways to avoid injury when running is to avoid braking with your feet. It is well-known that heel strike running creates a prolonged brake force at touchdown which is very destructive to the knees and hips and was implicated in causing tibial stress fractures, too. 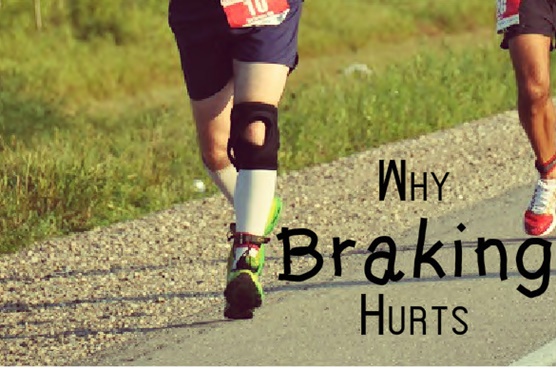 Brake Force at Heel Strike Does the Most Damage in Runners

How does this braking force arise in heel strike running?

To initiate the next step in heel strike running, the leg swings ahead of the body. The forward-driving swing leg is usually completely straight as the knee is unbent. Meanwhile, the forefoot is pulled back to allow heel strike. What’s the big problem with this method of running?

When the heel strikes the ground, the system decelerates abruptly, causing the body to come to a temporary dead stop. This produces a heavy jolt which increases in magnitude when running uphill with a heel strike –because the body needs more horizontal force to get up the hill.

Another problem with sudden braking at heel strike is that it increases frictional forces.

Because strike position is in front of the body, the center mass is above the leg’s center height, thereby exerting rotational torque on the body. To initiate flight, this rotational torque helps propel the body over the heel, over the arch of the foot, and up on the toes.

Virtually, the net torque acting on the body at heel strike produces a compressive force on the knee-joint when the weight of the body pushes down on the stance leg positioned in front of the body.

Curious about the role of foot strike in performance, I noticed elite distance runners, Mo Farah and Tirunesh Dibaba, who are forefoot strikers, show heel strike mechanic similarities when slowing down when crossing the finish line (shown below).

When these runners slow down to stop running, they pull their forefoot back as if attempting to heel strike, and land flat-footed. Hence, the term braking with respects to heel striking.

Could the braking forces related to heel striking prevent a heel striker from reaching their optimal performance level in terms of speed?

It is often alleged, in grave error, that the role of biomechanics in performance capacity in running is well investigated, when in fact, it is vast, and we know little about it, especially the role of foot strike in speed as well as endurance performance.