Rocker running shoes are supposed to help a runner avoid heel strike, and instead promote a midfoot/forefoot strike landing to avoid injury and save more energy. But how can a shoe do this?

The answer apparently lies in the curved outsole which fosters a strike zone in the midfoot – forefoot region of the foot, and somehow, magically, POOF! you land on your forefoot with little conscious control.  Pretty cool eh?  Not so fast. 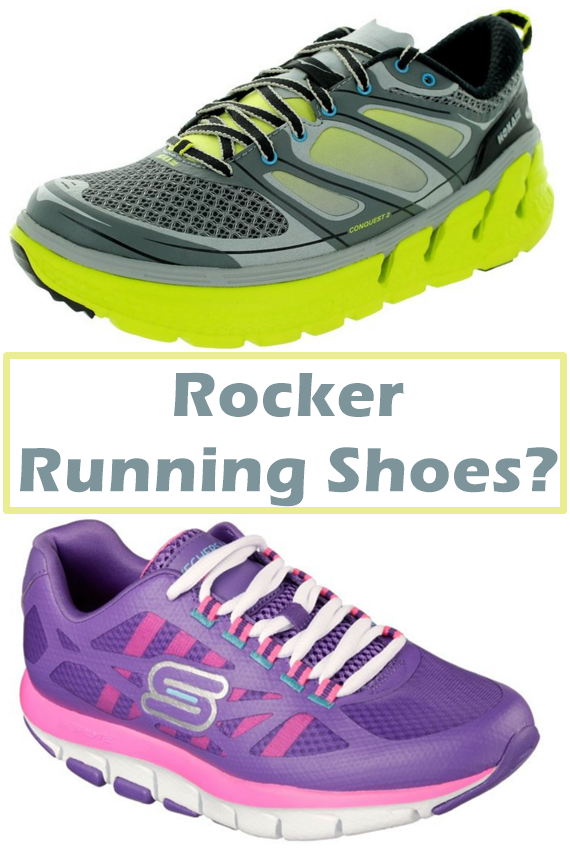 From a business perspective, it is smart to jump on the ‘anti-heel strike’ bandwagon since accumulating research shows that heel strike running is more forceful than forefoot running and design a shoe that prevents a heel strike landing.

In essence, a forefoot rocker shoe thinks for us instead of using our own conscious efforts to modify our foot strike.

It turns out the benefits of a rocker shoe may diminish over time,  why?  They are too heavy.

Forefoot striking may be more economical than heel striking in many ways, yet more studies are needed to support this.

Correlational data though, does imply that forefoot striking may be associated with less oxygen expenditure.

Therefore, if a forefoot rocker shoe allows for an automatic forefoot strike landing,  can energy be saved?  The answer is no because the drawback of a rocker shoe is the mass.

Forefoot rocker shoes for forefoot running are heavy and will suck the energy right out of you according to a study by Sobhani et al.

And, perhaps adding more padding under the foot, as in a rocker shoe may result in unfavorable foot strike mechanics as it would be more difficult to sense the ground than if running barefoot.

Don’t rely on a shoe to do the dirty work for you,  learn to modify your foot strike so you can retain the capacity to land on your forefoot in any condition, especially when fatigued.  Besides,  when the shoe does all the work,  the feet become dormant and weak, which may lead to bigger problems.

Though, forefoot rocker shoe manufacturers had the right idea by designing a shoe to improve foot strike mechanics,  they went the wrong way by increasing cushioning and motion control constructs which may have negative implications for a runner seeking to improve running performance.