Do your legs feel heavy towards the end of a run? Heel strike running may limit running performance due greater muscular and mechanical demands.

Factors relating to how heel strike running may limit performance:

Excessive muscular effort coupled with lack of elastic use in heel strike running may compromise performance, resulting in premature fatigue, and may justify why many elite runners do not heel  strike.

Many elite runners, including elite marathoners such as Paula Radcliffe and Haile Gebreselassie are forefoot strikers, not heel strikers.

Reducing impact when running is fundamental for injury prevention and at faster running speeds, the body preferentially moves away from landing on the heel towards landing on the front part of the foot. 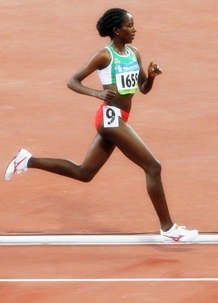 Having been a heel striker for many years,  it is much easier to relax the legs in forefoot running because much of the movements are less forced as demonstrated beautifully by Tirunesh Dibaba (left).

Forefoot running may be mechanically easier than heel strike running because in forefoot running, the knee’s are softly bent which adds a pop of spring to one’s stride.

The spring-like behavior of the leg uses elastic energy from the tendons which decreases the amount of muscular demands thereby conserving energy. This is why many forefoot runners, like Dibaba, look springy when they run and appear less strained.

Too Much Stiffness in Heel Strike Running

In heel striking, less elastic energy is used because the knee joint essentially breaks the chain of compliance in the leg. In other words, an unbent knee at foot strike impedes the leg from acting as an energy-saving spring.

The Achilles tendon and the arch of the foot supplies elastic energy more generously in forefoot running.

However, in forefoot running, which involves greater limb compliance by bending both knees, the elastic structures of the leg may save up to 50% in energy savings!

It may be possible that the mechanics of a heel strike coupled with the excessive movements initiated by the musculoskeletal system may actually impair elastic energy reutilization from the Achilles tendon which may result in inadequate energy transfer.

Run forefoot, because you’re faster than you think!