Although leg cramps when running has its own set of factors that contribute to its severity and complexity, one common culprit is fatigue failure in heel strike running. 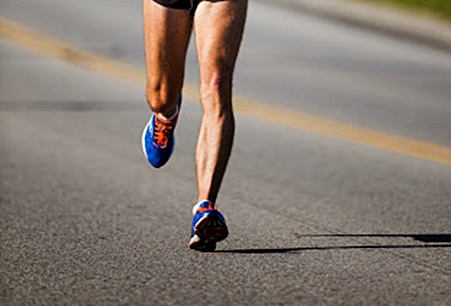 A study by Diebal et al. found that anterior compartment pressure dramatically decreased in subjects who transitioned from heel strike to forefoot strike running and were able to increase running distance by 300% without leg cramps

The rate of overloading on the leg in heel strike running allows intramuscular pressure surrounding the tibia to accumulate of which may be exacerbating during foot rollover as well.

To lessen the load on the leg and prevent leg cramping during long runs, making the conscious effort to land on the front part of the foot (the forefoot) reduces knee extension and allows for a strike position closer to the body which in turn, engages the spring mechanism of the hind-leg to pull the foot off the ground automatically to initiate flight.

Toe-off is not required in forefoot running as the foot is ‘picked up’ off the ground by the tendons of the hind-leg after the weight of the body passes over the foot.

In forefoot running, the quick removal of the foot from the ground is controlled by the spring-action of the leg and is a reflexive response that may be under involuntary control -it just happens on its own, hence the term reflex.

Therefore, based on the principles of physics, forefoot running increases favorable mechanical conditions to eliminate the impact transient and loading-related leg cramps.