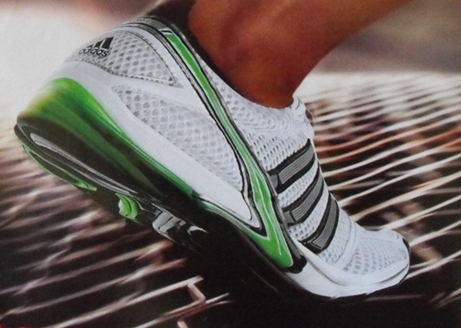 Most runners, myself included, have wrestled with injury, often wondering if the injuries will ever end. But, runners make the mistake of relying on the corrective and protective elements of a shoe, instead of modifying biomechanics to prevent injury.

Not all running shoes are harmful. Barefoot running shoes for example, have been found to improve biomechanics and foot strength. But, according to Robbins and Gouw, nothing provides the proper ground in basic biomechanics than running barefoot.

“In humans, avoidance of uncomfortable, or painful impacts are dictated by plantar tactile stimuli which moderates shock on subsequent impacts when walking, and running. This feedback control circuit is optimized in terms of protection for mechanical interaction of the bare foot and natural surfaces. Eventually, learning allows anticipatory avoidance. Modern running shoes are unsafe because they attenuate plantar sensations that induce the behavior required to prevent injury” (Robbins and Gouw 1996).

This perceptual illusion, evoked by thick cushioned running shoes, factors into the never-ending battle with injury in most joggers. Avoidance behavior is an adaptation that enabled us to survive as barefoot runners millions of years ago.

Barefoot runners tend to land with a more flatter foot strike where initial contact is made towards the front part of the foot and not directly on the heel as in heel striking.

Taken together, barefoot running and a forefoot strike landing ensures a reduction in vertical loading via natural adjustments in hip and knee flexion which reflexively varies in response to surface hardness.

Barefoot running may lie at the core of biomechanics, and in many cases, appears to be fundamental from an injury prevention as well as a performance enhancement standpoint.

Past reports have revealed that running injuries are rare in habitual barefoot running populations such as Ethiopia. Not only that, distance runners who have smashed world records and are Olympic champions grew up as barefoot runners and most of these runners are also from Ethiopia.

Although, the positive effects of barefoot running sounds reasonable, many habitual shod runners think it’s a bad a idea. However, barefoot running on grass, or asphalt for less than 5 minutes a day is powerful enough to improve biomechanics.