Foot proprioception virtually controls your biomechanics when running. Ever since the researchers at Harvard University suggested that humans most likely evolved as barefoot endurance runners, scientists have been investigating the role of proprioception in the feet in moderating biomechanics to allow ‘safer’ running. 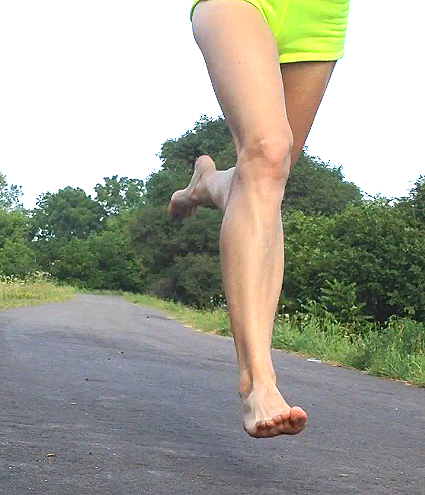 What Foot Proprioception Can Do For You

Proprioception dictates reflexive signals to allow for adequate biomechanical adjustments and impact-moderating behavior. This is how habitual barefoot runners run with less impact and potentially safer than the average shod-runner.

Proprioception Critical Role to All Aspects of Running

In addition to enhancing perceptual awareness of impact, foot-proprioception mediates muscle control and leg stiffness to provide greater cushioning when running. There is no question that exposing your bare feet to the ground strengthens proprioception, improves tactile resolution as well as your running form.

Consider this example: you are running barefoot on an even road. What happens if the message from your spinal cord to your leg muscles are not exactly correct? You might set your foot down a little too hard, or not quite hard enough.

Nevertheless, you adjust your posture almost immediately and maintain your balance without even thinking about it. This reflexive mechanism is under control of the proprioceptors in the feet which allows humans to run safely.

From an evolutionary perspective, this is how the body likes to run, under the influence of proprioceptive feedback from the feet. Now, put on some shoes and run, and proprioception is dramatically reduced and balance performance is compromised.

Many experts believe that humans are no longer subject to natural selection. If this is true, we may never get the hang of running in certain types of athletic footwear.

Be sure to check out the Run Forefoot Facebook Page for answers to all your forefoot and barefoot running questions.