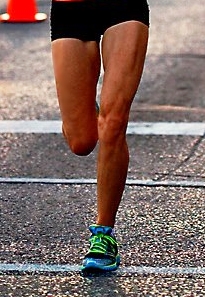 In heel striking, the foot spends more time on the ground which may require more oxygen uptake, thereby triggering earlier onset of fatigue.

In contrast, forefoot strikers may be more economical due to reduced ground contact time, reduced muscular effort, and better use of the elastic properties of the leg.

By making initial ground contact on the forefoot, may enhance the stretch-shortening mechanism of the tendon structures of the leg.

Moreover, after the forefoot contacts the ground, the heel quickly lowers to the ground before the foot is removed the ground, the interaction between the foot and the ground is very rapid, and minimal compared to heel striking.  As a result, the feet spend more time in the air which may also reduce force and traction production.

Learn How to Run Forefoot:

Foot strike in Forefoot Running – Check out exactly how your forefoot strike landing should look.

Leg Swing in Forefoot Running – learn how your legs should swing when you are running forefoot.

Shoes for Forefoot Running – Reviews on the best shoes for the forefoot running technique.