Knee running pain can be improved by running backwards because doing so allows for an automatic adoption of a forefoot strike landing pattern which reduces ground reaction forces, knee moments, and deceleration at touchdown and during stance. 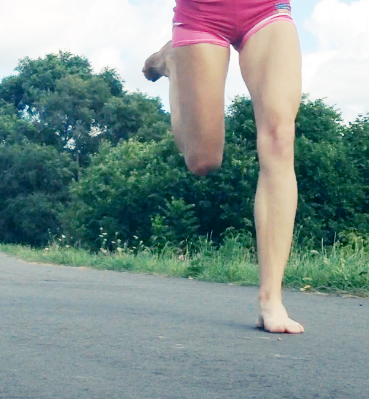 If you run backward, you do not heel strike, you will actually forefoot strike. In addition, the center of mass (COM) will be right where you want it which is above foot strike position at all times. This eliminates braking and joint loading.

Another equally powerful factor of backward running is it helps you recognize the location of the center of pressure (COP) on the foot at touchdown in which the COP should always begin at the forefoot and end at the heel and not the reverse as in heel strike running in the forward direction.

Furthermore, in heel strike running, the COP travels much slower over the foot, indicative of longer ground contact time and thus more time for force production on the body.

In the same study, the forward runners (heel strikers) interacted more aggressively with the ground at push-off to fuel momentum whereas a backward lean contributed to momentum in the backward runners (forefoot strikers) which lowered knee stress.

Habitual forefoot strikers, especially barefoot runners, do not push-off to initiate flight. Instead, they lean or fall forward for continuous momentum which reduces knee moments and the magnitude of the ground reaction force, making running easier on the knee joint.

The act of falling forward coupled with pulling of the foot minimizes deceleration during forefoot running.

Drills of backward running improves a forefoot running learners’ initial interactions with the ground by preventing heel strike, favoring a foot strike position closer to the knee and the COM, and prevents the risk of deceleration at each step, all of which shields the knees from damage.

How cushioned running shoes may cause you to run slower.

How heel strike running increases your risk of osteoarthritic knees.