One of the most common barefoot running injuries is top of foot pain. How does this happen? One suggestion is that you might be over-engaging your toes during the push-off phase of running gait. That is, you may be using your toes too aggressively to launch your body forward at each step. 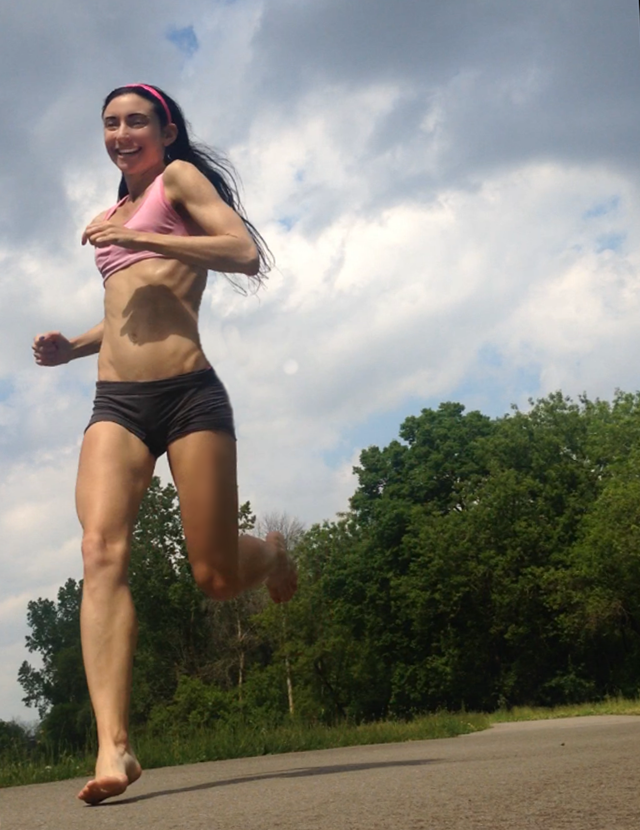 In my opinion, aggressive toe push-off to initiate flight during running is a common mechanical trait of heel strike running because it is the only mechanism that drives forward momentum since most heel strike runners fail to use their torso to drive sustained forward momentum. For instance, most heel strike runners run too upright with their upper body, resulting in a torso posture lagging behind initial foot strike position, therefore more work may be needed from the knee and foot to pull the body forward.

A study by Smith and Dahm (2001) observed that toe propulsion was facilitated by extreme toe dorsiflexion (shown above) which may compress, stretch and demyelinate the plantar interdigital nerve located under the intermetatarsal ligament.

Most nerves have myelinated (myelin sheath) axons –a component of the nerve which sends signals to another nerve. The myelin sheath is important for optimal conduction velocity of nerve signals –the thicker the myelin sheath, the faster, more secure a signal is.

Overall, toe propulsion leads to low or aberrant nerve connectivity in the feet, but subsequently all the stresses and straining from forceful toe dorsiflexion leads to interdigital neuroma due to entrapment of the interdigital nerve.

How to Avoid Toe Injury

To prevent toe injury from running, ease up on toe propulsion whereby running barefoot will allow for helpful adaptions in achieving this.

Habitual forefoot runners, especially those who run barefoot, don’t experience foot/toe nerve entrapment injuries because these runners don’t use their toes for propulsion in the same way heel strike runners do. This is where I feel Pose Running comes in handy because you learn quickly not to push, but to pull.

Because the center of mass is anterior relative to foot strike position in forefoot running, toe propulsion is not needed to drive forward momentum, rather it is the combination of finding the right degree of forward tilt and learning to use your foot passively with the ground by letting the spring-action in the leg remove the foot off the ground behind the body.

To coordinate this with success, wear zero drop running shoes with a hard midsole.

Running shoes that are ‘barefoot-like’ however, are vital for improving foot strike mechanics because they allow physical reality to closely match the perception of foot strike awareness. This enables you to accurately gauge your position of center of mass relative to your foot strike, helping you pull, not push with your feet.

How to Gain More Endurance for Running