Forefoot running utilizes gravity acceleration to fuel forward momentum and it allows a runner to use less of their own mechanical energy. This is how gravity works in forefoot running.

Gravitational acceleration means an object is falling because gravity is pulling it down towards the ground, and therefore the object does not expend energy to fall.  So, how exactly does the concept of graviational acceleration relate to saving energy in forefoot running?

Dr. Romanov, author of POSE running, uses the concept of falling by leaning at the ankles, not the hips, to fuel the momentum to move in the forward direction while forefoot running.

According to Dr. Romanov, in forefoot running, gravitational acceleration occurs as the body falls forward, meanwhile the foot is quickly released from the ground and floats up underneath the hips, similar to pistons popping up and down.

This movement strategy may use less energy than heel running as heel runners don’t fall forward, they reach out with the leg, taking larger steps in order to move forward.  This is referred to as over-striding and may work against gravitational acceleration, possibly influencing earlier onset of muscular fatigue. 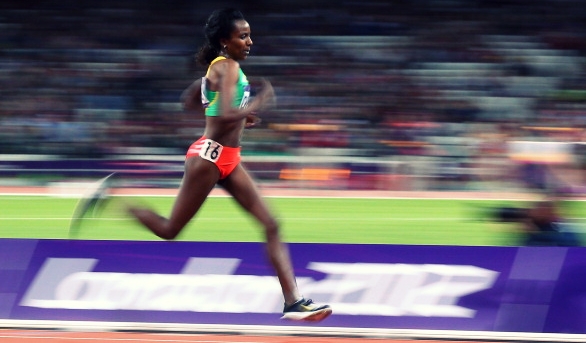 The alignment of the body in forefoot running (the body falls forward, the leg swings rearward) may allow for greater momentum and less vertical displacement:

It All Starts with Bending the Knees

Keeping the knees softly bent, at whatever angle feels comfortable to you, while forefoot running really amplifies the spring element of the leg.  In addition, bending the knees may actually help promote a forefoot strike landing with greater ease.  How does this save energy?

Bending the knees allows for favorable mechanical conditions to facilitate a forefoot strike, which requires greater use of the tendinous structures of the lower leg.  Running with greater activity of the tendons of the leg has been implicated in energy conversation.

In contrast, in a 2010 study in Nature, Dr. Daniel Lieberman and his colleagues at Harvard University reported that in a heel strike, which often involves an unbent knee, the impact occurs under the ankle where the ankle was found to convert little translational energy into rotational energy and most of the translational kinetic energy was lost in the collision.  In short, anytime energy is lost, that can’t be a good thing.

Lastly, by ‘activating’ the spring-like behavior of the leg by bending the knees and running forefoot,  you will find your legs feel more relaxed than if you were heel striking.  So, relax, fall, and let your legs naturally work as springs and see how it feels.
More Intriguing Reads From Run Forefoot: