The best way to be a more energy efficient runner is by using less muscle power in the leg by avoiding heel strike running, and instead use more of the passive energy supplied by your Achilles tendon. You can do this by landing on your forefoot. 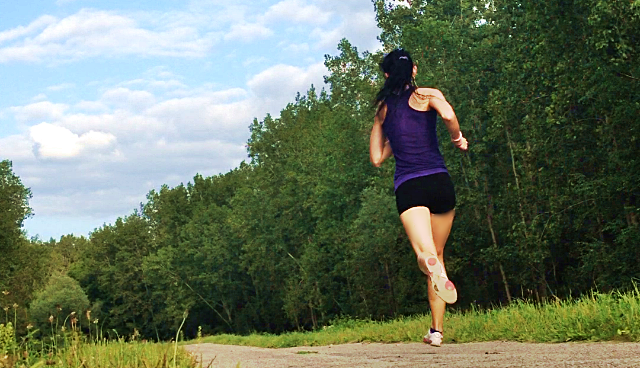 How to be a More Energy Efficient Runner

Experts have theorized that forefoot runners are more efficient and faster than heel strike runners because forefoot running increases storage and release of elastic energy in the arch and Achilles tendon.

The fact of the matter is, greater use of the Achilles tendon for energy is remarkably economical and may prevent a runner from feeling overly tired after running. 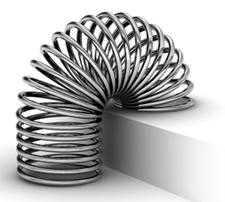 Pre-mature fatigue may arise in some heel strikers because their muscles are working harder as compared with forefoot runners. The muscles play a more passive role in forefoot running, allowing the tendon’s to take over.

Evidence in the scientific literature related to physics has demonstrated that mass-springs such as the oscillating Slinky can move on its own forever under optimal conditions. Why? Because of the elastic strain energy, just like in our Achilles tendon.

For example, a continuous flight of stairs would allow a Slinky to travel downwards infinitely by utilizing its own mass to stretch and recoil and gravity to pull the unit down. Here, the Slinky is not working against the force of gravity, but works with the force of gravity, by letting gravity pull it down.

This is how forefoot runners run, like a Slinky, relying more on the ‘spring’ behavior of the Achilles tendon which removes demands away from the muscles, and prevents you from feeling tired after running. In fact, you probably wont even want to stop running!

Just like the Slinky walking down a flight of stairs, forefoot runners allow gravity to pull the body down via a forward lean which shifts the center of mass forward.

The forward position of the center of mass coupled with bending both knees and increasing ankle plantarflexion allows a forefoot runner to use their own mass to stretch and recoil the tendon’s of the hind-leg.

Structurally, the tendons of the lower leg are similar to an oscillating Slinky and like a Slinky, stores potential energy that results in high performance running.

Potential energy is passive energy -just think of it as energy handed to you for free, without effort.

To prevent yourself from getting tired during running, you want to use more ‘tendon energy’ (forefoot running) and less ‘muscle energy’ (heel strike running) during running.

Now that we know forefoot running optimizes free energy supplied by the lower leg tendons, from a theoretical perspective, how can a runner run with a forefoot strike without getting tired? 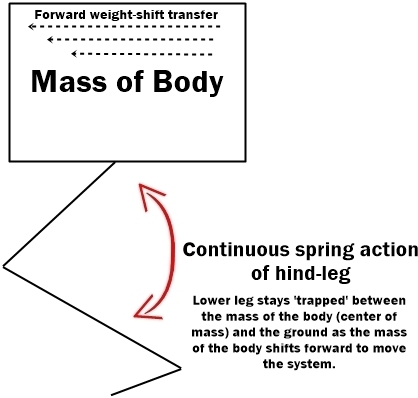 Above, shows a theoretical model of the relationship of the body as a mass-spring model and the forefoot strike running style to allow for ‘unlimited’ endurance capacity at an undefined speed.

Under optimal conditions: no air resistance, flat land, optimal running speed, if the torso (the center of mass) shifts forward, allowing the system to fall due to the force of gravity and if the knees are bent at the right angle as the forefoot makes initial contact with the ground landing in a strike position that is not in front of the knee as in heel striking, the spring-like tendons of the hind leg become ‘trapped’ in a position between the center of mass and the ground that allows for rapid elastic coiling and recoiling which instantaneously, with little muscular effort, pulls the foot up off the ground to prepare for the next step.

These are the mechanical parameters of a forefoot strike running style which is a compact style of running and may optimize potential energy storage better than heel strike running to allow continuous, efficient steady-state running.

Bare in mind that this is just a theoretical model to put the mechanics of forefoot running in perspective to show that this style of running is a good approximation to run with more passive energy via the Achilles tendons.

Moreover, future studies on various foot strikes using locomotor models would be very useful to validate the possibility that forefoot strike running may be a more efficient style of running compared to heel strike running.

Energize your water to get through an early morning run.