-they heel strike instead of adopting a forefoot strike to reduce shock and body load.

Another part of the problem is that footwear companies fail to educate runners on the fundamental purpose of a minimalist running shoe.

However, the footwear industry failed to inform us WHY less is more when it certainly wasn’t for decades. This is why heel strikers get injured running in minimalist footwear.

The Less You Know About Running, The More Money Shoe Companies Make

The ugly truth is footwear companies do not want you to know how to run properly because if you did, you would never injure and would not repeatedly purchase new footwear to ‘fix’ re-occurring running injuries.

Running shoe manufactures want you to fear running and prefer that you feel biomechanically flawed to depend on their footwear to make you a ‘better’ runner.

Running shoe manufactures tailor their shoe technology to reduce shock attenuation and ground reaction forces.
However, shock attenuation and ground reaction forces are absent in a forefoot strike (shown left); thus, forefoot runners do not need to rely on standard shoe technology to prevent injury as they run with considerably less impact than heel strikers. 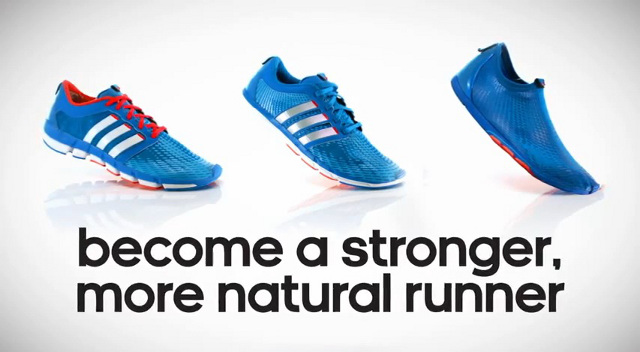 I felt the need to revise the notion not only on the purpose of minimalists footwear, but HOW we should be running in these shoes. It’s important that runners understand the real purpose of a minimalist shoe in order to avoid injury.

In a nutshell, the purpose of a minimalist running shoe is to accommodate the natural movement of the foot, to better sense the ground beneath you, and to help adjust your footstrike accordingly to a forefoot-strike so you can get the best out of running, pain free.

Marti, B. (1989). Relationship between running injuries and running shoes.