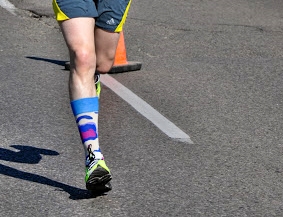 The body-shock of heel strike running exerts damaging pathophysiological effects on the body and is directly related to body loads where as shock increases, active shock absorption in the muscles increases and so does the risk of injury.

At heel strike, the magnitude of the body-shock ramps up active shock absorption in the muscles at the expense of greater oxygen consumption and therefore energy expenditure.

Jorgensens et al.,  investigated the effects of a heel counter on reducing injury in heel strike runners via reducing muscle loads where muscle load was expressed by oxygen consumption.

Side note: A heel counter is a form of external support in the heel of a non-minimalist running shoe which affects shock absorption and stability at heel strike.

Why did removing the heel counters cause the heel strikers to be less economical?

The heel strikers were less efficient without the heel counters because the body was trying to adapt to the increase in body load due to the body- shock at heel strike.

The researchers suggested that the heel strike body-shock increased oxygen consumption due to increased eccentric muscle action and joint flexion (i.e. adaptation) in response to the increase in body loads.

This is how overuse injuries occur:  an energy crisis arises resulting in fatigue when the magnitude of the body-shock exceeds the absorptive capacity of the musculature during heel strike running.

To remedy the high impact nature of heel strike running, you must run with less shock.

More studies are adding to mounting evidence for the effectiveness of forefoot running in injury prevention.

Forefoot running has been found to have a net benefit on the body: less shock, less pain, less muscular work for shock absorption, and therefore less injury.

References:Jorgensen, U. (1990). Body load in heel strike running: The effect of  a firm heel counter.