Strain injury in the calves are typically common in newly transitioned forefoot runners (i.e. those who’ve transitioned from heel striking to forefoot striking). 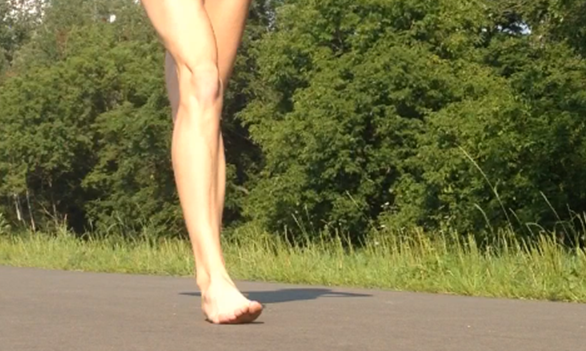 Why Some Forefoot Runners Get Strain Injury in the Calves

Compellingly, a study by Sterne at el., (2014) purported that elastic mechanisms of the lower leg that are indirectly controlled by the calf musculature are under-developed in habitual heel strike runners.

Bottom line, experts speculate that there’s something about the heel strike running style that limits the ability of heel strikers to use the calf musculature effectively when forefoot running -this is why heel striker runners who experiment with forefoot running feel like their calves have been blow-torched after the fact.

Although, heel strike running may weaken the calves, the wrong forefoot running technique will cause calf pain also. For instance, the calves are over-loaded if the leg is used to push or propel the body forward to initiate flight.

Habitual forefoot runners fall and remove the foot passively via firing of the hamstrings, according to Dr. Romanov of Pose Running.

The calves role in forefoot running is to provide balance control, helping lock the leg into a stable position where elastic energy storage is optimized in the Achilles tendon, which in turn, reduces work done by the surrounding leg muscles.

So, if your calves are sore after running forefoot for the first few times, especially if you have been heel striking for many years prior, your calves just need time to adjust and adapt to a new running condition.

Its the same as lifting weights when you have never weight lifted before. Your arms will feel very tight, stiff, sore and hard to move the next day. The same effect is taking place within the calf musculature when forefoot running is first experienced.

The pain is actually a form of strengthening and not indicative of an injury. This is where patience and belief in your ability as a forefoot running is important. Be patient, your calves with get better.

Where to buy Vibram shoes.