Wearing running shoes with traction seems like a good idea for trail running. And, when winter rolls around, many runners are quick to upgrade their footwear to a more treaded shoe. Turns out that too much tread for running is a troublemaker for the knees!

When you learn forefoot running, it is best to learn the technique in a shoe that best looks-like the human foot. If you look at the soles of the bare foot, you will notice that we don’t have tread. Therefore, if you struggle with knee pain while learning forefoot running, your running shoe might have too much tread. Instead, aim for a minimalist shoe with smoother tread pattern. 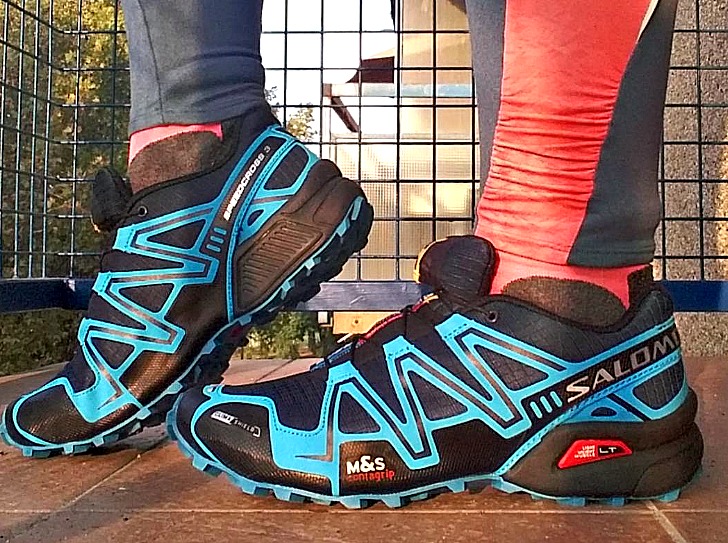 To all the runners out there, avoid wearing running shoes with protruding/studded traction because a new study found that running in these shoes is linked to tear of the ACL.

New evidence suggests that running shoes with thick traction contributes to cruciate knee ligament injury, such as tearing of the anterior cruciate ligament (ACL) in runners.

A 2010 study in The American Journal of Sport and Medicine found that excessive traction influenced knee ligament tearing and possibly rupture in runners.

The reality is, we did not evolve tread on our feet to run and shoe traction is certainly a deviation from the natural construct of the human foot.

With that said,  shoe traction is an unnatural substrate to the human foot which coincides with the adverse effects it has on ligament integrity of the knee.

Why did we evolve to have ‘traction-less’ feet?

Our barefoot running ancestors adopted a landing strategy that enforced a more stable interaction with the ground.

To maintain healthy knees as a runner, it would be sensible to run in a shoe that closely resembles the sole of the human foot. Therefore, a smoother sole coupled with a forefoot strike landing will curb knee pain and injury.

If you run with a forefoot strike, you don’t need a shoe with traction for the winter. Why? Because there is less brake force applied to ground (or ice..) when your foot lands toe-to-heel when running.

Here’s a video I did discussing the matter.

Forefoot Running Tips and Benefits – An article every runner should read. Find out how forefoot running improves performance and reduces the risk of getting injured.

Learn Forefoot Running Faster by Running Barefoot – Today, more and more runners are experimenting with barefoot running as a guidance to run better.

Why Avoid Heel Strike – An overview of the long list of running injuries implicated in running with a heel strike.