In addition, the high cadence and lower ground contact time in forefoot running allows the foot to spend less time on the ground, thereby limiting exposure to slippery surfaces.

How to Run in the Winter Safely Without Slipping

Heel strikers have a greater chance of slipping on ice than forefoot strikers because the center of mass is behind foot strike position, the knee is straight at foot strike, and aggressive toe-off makes it easier to slip as well.

At heel strike, foot strike position is ahead of the body causing braking; meanwhile, the center of mass is approaching the planted leg because the system is trying to move forward despite the braking effect at heel strike. In a car, what happens when you slam on your brakes over ice? The car slides. The same outcome will happen when heel striking over ice.

As mentioned briefly, forefoot running is described as a ‘compact style of running’. This means that foot strike position is near the center of mass which is achieved by a slight forward lean or a forward shift in the center of mass coupled with striking the ground on the forefoot.

Therefore, posture at the time of initial ground contact is very important for safe winter running. The video below perfectly illustrates the safeness of forefoot running when running on ice:

If Dr. Romanov was heel striking, he would have slipped because the center of mass would have collided with the leg positioned in front of the body at touchdown.

And lastly, because of the forward lean or forward position of the center of mass, toe-off is less aggressive in forefoot running, allowing for a better ‘rebound’ effect between the body and the ground, including ice. 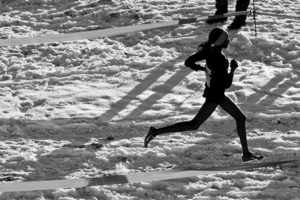 The overall gait kinematics of forefoot running, that is, shorter stride length, higher cadence, shorter contact times with the ground as well as a less vertical positioned trunk, correspondingly increases the propensity to run safely under ice conditions.

Conversely, the destabilizing forces related to heel strike running strongly supports the idea that heel striking is unsafe during the winter months as landing squarely on the heel with a leg that is maximally extended in front of the center of mass, makes it impossible to grasp a stable landing.

Run Forefoot Because You’re Faster Than You Think!