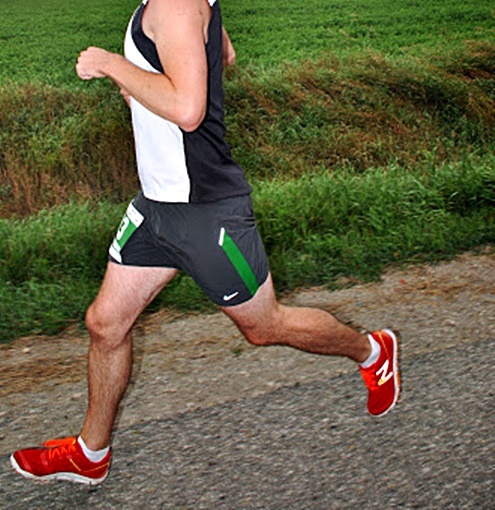 If your leg muscle pain is so annoying that you dread running, try forefoot running and avoid heel striking, as below are the injuries linked to heel to toe running.

Metatarsal Stress Bone Fracture – Landing heel to toe when running was found to alter plantar pressure distribution in a way that puts too much stress on the metatarsal heads.

Common Knee Problems – The peak impact and compressive forces produced at heel strike attacks the knee cartilage and may cause knee osteoarthritis.

Broken Hip Femur -That’s no typo: runners who heel strike, especially over long distances,  have too much impact force travelling through their leg, which may increase the risk of a femur fracture!

Achilles Injury – Heel strike runners use their foot too aggressively with the ground, leading to increased pronation and high stress and strain on the Achilles tendon.

Heel Pain – Because the heel pad is strong enough for walking, but not running, heel strike running reduces blood flow in the heel pad, leading to heel pad deformations.

Ankle Inversion Injury – Because landing on the heel triggers the foot to move around abnormally during stance, this intensifies stress on the ankle.

Low Back Pain – The high impact of heel striking doesn’t just affect the leg, it comes up through the hip and into the back as well.

Degenerative Joint Disorders – Because your joints are overloaded with impact when heel strike running, this greatly imposes repetitive trauma on the joints.

ITBS – In heel strike running, the foot spends more time on the ground, especially more time spent in the impingement range of knee flexion angles, placing high strain on the IT band.

Here are the specific ways heel strike running mechanically contributes to many of the common injuries that inflict most joggers.

Impact Peak – This is makes your knee and hip joints hurt.

High Ground Reaction Forces – The high ground reaction force is what separates heel strike from forefoot strike running in that this force is probably the number one reason heel strike runners get plagued with so many chronic injuries.

Compressive Forces – At heel strike, in addition to the ground reaction force, a massive compressive wave is naturally generated  and is linked to ITBS