Many runners believe that running damages the knee, this is true, only if you run with a heel strike will you have knee problems. But, if you run with a forefoot strike landing, you should have no knee problems at all as forefoot running is very non-straining on the knee, and by the way, have you ever seen a forefoot runner wear a knee brace? I haven’t, but I see tons of heel strikers wearing a knee brace strap for running.

Dangers of a Knee Brace Strap for Running

I always see many runners wearing a knee brace and they still look like they are in pain, so does a knee brace strap for running help at all?

Whether you are a forefoot striker or a heel striker, wearing a knee brace during running causes lower leg pain by increasing anterior compartment pressure of the lower leg.

Jerosch et al., found that runners running at a speed of 8 km/h and wore a knee brace had a significant increase in anterior compartment pressure from 49.1 mm Hg to 95.6mm Hg!

In addition, knee braces for running disturbs the preferred movement path of the leg. Regalburto et al., reported that running with a knee brace may move ankle or knee-joint mechanics from their ideal position. Immobilizing the knee-joint with a knee brace may also restrict the knee’s range of motion, which may alter foot strike mechanics, causing the lower leg to move less efficiently and possibly, with greater force.

The meaning of the findings is clear: knee braces are ineffective and are detrimental to a runner as high anterior compartment pressure is the leading risk factor for chronic compartment syndrome, a common condition in heel strike runners.

Forefoot running, shown below, not only reduces lower leg anterior compartment pressure, it also protects the knee-joint –this is why you rarely see a forefoot runner wearing a knee brace. 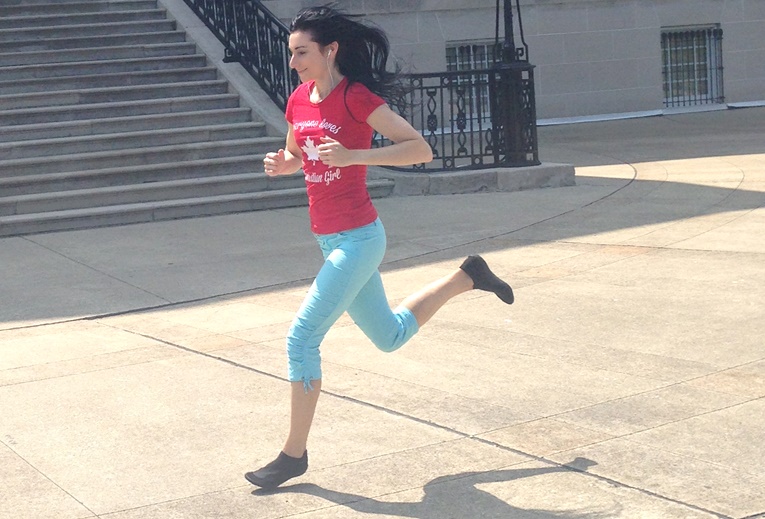 In forefoot running, the ankle lands under the knee while the knee is kept softly bent at touchdown. Landing this way relieves knee-joint stress.

Knee braces are commonly worn by heel strike runners because these runners run with knee extension of the leg at touchdown which holds the knee-joint in an unstable position and generates a braking effect on the knee-joint as well.

Next time you experience knee pain, don’t wear a knee brace, rather consider modifying your foot strike from a heel strike to a forefoot strike as doing so not only protects the knee, but has more health benefits than heel strike running.

Best Way to Do Speed Work

Best Ways To Fuel During a Race