Pretty soon, more and more recreational runners will accept that runners knee stems from running shoes with cushioning, simply because analyses of many findings lead to questions about the role of maximum cushioned running shoes in protecting the knee. 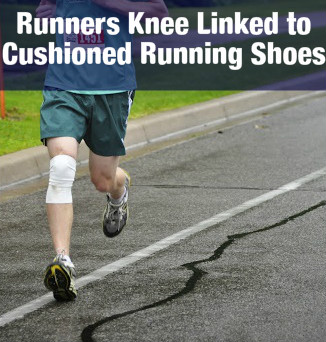 Contrary to conventional wisdom, cushioning in a running shoe is a potential risk factor for knee pain, particularly cushioning under the heel.

An explanation for this is that excessive cushioning creates difficulty for the central nervous system to detect changes in surface dimensions or hardness to optimize foot strike behavior.

It gets worse. Heel cushioning of a running shoe influences over-striding, impairs foot-placement awareness, and leads to a greater exchange of momentum with the ground, all of which causes the knee to take a beating.

Many studies are putting heel strike running along with the thick heeled footwear heel strikers wear, in a sorry situation.

Though, it is tempting to jump to conclusions and state that knee pain is caused by heel strike running, the bright side is, forefoot strike running in minimalist running shoes reduce knee pain.

Forefoot runners who are either barefoot runners or minimalist runners, are less likely to over-stride and generate compressive loading and knee-joint torque.

In the case of protecting your knees when running, less is certainly more when it comes to running shoes.