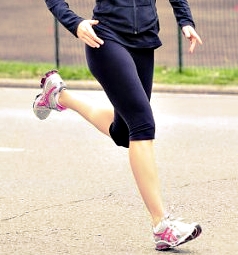 Will a cushioned heel running shoe protect against the impact transient at heel strike?

Unfortunately, shoe cushioning has little effect on reducing the impact transient. This is obvious because the impact transient is linked to repetitive stress injury and the injury rate in joggers is consistently high despite wearing cushioned heeled shoes.

At heel strike, the center of pressure (COP) occurs on the lateral aspect of the heel and rapidly moves medially up the foot to the 1st and 2nd metatarsal head (shown right).

The heavier the heel striker, the greater the COP applied on the foot, especially on the 1st and 2nd metatarsals which are linked to poor shock absorption.

Predictions have been made on stress fracture development in heel strikers with respect to the distribution pattern of the COP on the medial forefoot.

runners land with a forefoot strike, not a heel strike.

Less Work on the Knee in Forefoot Running

In forefoot running, the ankle plantar-flexors absorb much of the shock at foot strike thereby reducing global impact on the body, particularly at the knee joint. This may suggest the lower incidences of runners knee in habitual forefoot and barefoot runners.

Furthermore, proper forefoot running involves the knee’s to remain soft and slightly bent at foot strike. This form of increased knee compliance has been found to soften landings in barefoot runners.

In heel striking however, the knee is exposed to more shock where the magnitude of peak knee extensor moments is also greater than forefoot running.

Essentially, the knee is overloaded in heel striking because it’s used as a source of power for propulsion.  The findings suggest the knee endures more mechanical in heel striking, which coincides with the high prevalence of knee injury in recreational runners, most of which heel strike.

Many obese individuals are afraid to run because they assume their body weight will cause them injury. But, it’s not how much you weight that’s the problem, its how your body interacts with the ground while running that determines injury.

Novacheck reported that most of the injuries in running occur as a result of the high impact forces at the time of heel strike.

A fairly straightforward, simplistic conclusion to this would be eliminated heel strike to eliminate peak impact and therefore reduce the risk of injury.

Run Forefoot, because you are faster than you think!