You may be able to get more gas mileage if you run with a forefoot strike because it may allow the elastic structures of the lower leg, namely the Achilles tendon to store more elastic strain energy as compared with heel strike running.

The prevailing notion is that increased plantar-flexion as well as increased knee flexion (a bent knee) prior to and at touchdown as well as heel dropping shortly after the forefoot strikes the ground slackens the Achilles tendon under low-impact conditions which may load more elastic strain or potential energy through the tendon.

In contrast, prior to and at touchdown in heel strike running the opposite movements of the lower leg occur (shown below) in that the foot is dorsiflexed (forefoot lifted up) with the knee of the landing foot completely unbent which produces high impact conditions and hyper-stretches the Achilles. 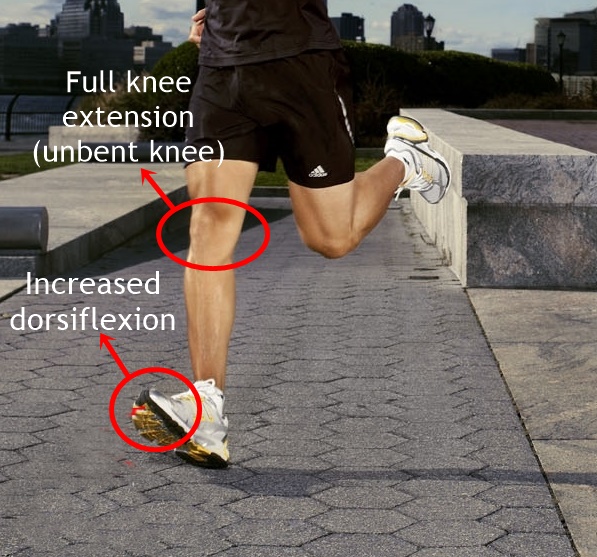 This landing configuration may not put to work the elastic properties of the Achilles tendon in the lucrative way forefoot running does. In consequence, landing heel-first with a straightened knee when running may make the Achilles tendon an ineffectual, sloppy spring that could eat into running economy whereas there seems to be more evidence suggesting landing with a forefoot strike during running may maximize the contribution of elastic energy exchange in the Achilles tendon which may cause the muscles to perform less mechanical work and expend less metabolic energy