Shin injuries are most likely more common in heel strike running because knee stiffness is greater at touchdown as compared with forefoot running where the knee is more compliant and therefore, less stiff. 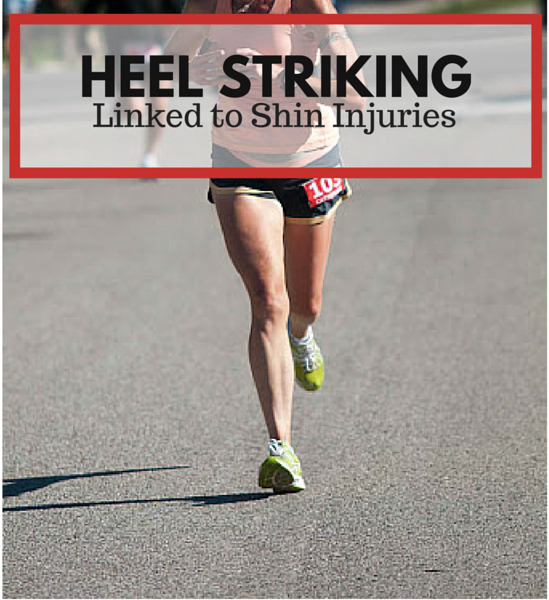 A study by Milner et al. revealed that runners who had suffered shin injuries, such as a tibial stress fracture, in the past ran with stiffer knees compared to healthy runners.

What causes knee stiffness when running?

The runners in the study were heel strike runners whereby at heel strike, the knee joint is fully extended which causes the knee to stiffen-up.  The researchers noted that initial loading in heel strike running led to greater changes in vertical loading and knee moments which were considered key in the development of a tibial stress fracture, suggesting that an unbent, stiff knee at touchdown results in a sudden loss of impact absorption.

Just to recap, at heel strike, the knee is straight (less flexed) and is more difficult to use as a shock absorber because less knee flexion coincides with greater knee stiffness. Conversely, other reports confirmed that greater knee flexion at touchdown reduces peak vertical forces, making for a softer landing during running.

Although, heel strike runners who have transitioned to forefoot running boasts a number of success stories, support for its effectiveness on preventing tibial stress fracture is mainly anecdotal. Nevertheless, more runners are committing to forefoot running for injury prevention purposes and is gathering steam in the scientific and clinical communities.

The best way to polish your forefoot running form and build better foot strength is by running barefoot.

The differences between forefoot striking and heel striking.

Find out why cushioned running shoes leads to more injury in runners.

What is proprioception and why it’s important for running properly.

ALOHA Has Raised the Bar on Chocolate! ALOHA Superfood Chocolate was Created with Love for a Nutritious Indulgence You Can Enjoy and Share Daily. Buy Now!

21 Day Fix EXTREME – Everything you need for serious results.